I saw my OB 2 weeks ago and one of the first things she said was that she thinks I have a small birth canal and she would like to “offer” me a c-section for this baby.  Like she’s offering me a dessert at half price or something.  Of course I knew that subsequent babies typically get bigger but I was hoping that it wouldn’t be much of an issue if my pelvis had truly relaxed, Theo and I hadn’t been in optimal positions, etc.  She said if I can avoid getting gestational diabetes this time (which sounds about as likely as not getting wet in a swimming pool), then there’s a better chance for a successful vaginal birth.  Once you make the choice to go vaginal, and the baby’s head is out, there’s no going back.  If he or she gets stuck (i.e., shoulder dystocia), there’s a good chance that he or she won’t survive.  The doctor that delivered Theo said there’s not much that’s scarier for an OB than shoulder dystocia.

I really don’t want a c-section.  I’m comfortable with the vaginal birth (as comfortable as one can be with it).  Although it was scary for those 10 seconds, Theo’s perfect and I’m fine and we all recovered beautifully.  I wish I had a crystal ball and I knew what was going to happen.  The doc said she could do an amnio at 36 or 37 weeks to start checking for lung maturity and as soon as it’s good, she would induce in hopes of getting a smaller baby.  But I’m not real hot on the idea of an amnio either.  She said if I choose to go vaginal AND I get diabetes, she won’t let me go past 38 weeks this time.

More stuff to stress out about.  Of course I don’t want to put my baby in harm’s way, but I have a feeling that Theo’s shoulder dystocia was a fluke and it probably won’t happen again.  Is that just me being selfish or is that me following my motherly instincts and listening to my body?

Anyway, the little booger was hiding for the doppler so I had to get another ultrasound (okay, twist my arm!).  We saw that nugget squirming around like crazy in there.  We saw her/him kicking and waving and chomping.  It’s so amazing how in such a short time the baby goes from a little ball of goo to this teensy weensy miniature human.  Just incredible.  He or she was healthy and happy so at this stage, we couldn’t ask for more.  We made it past the scary 12 week threshhold so there’s a good chance that this baby is here to stay.  Now we can let ourselves get attached (or more attached as the case may be). 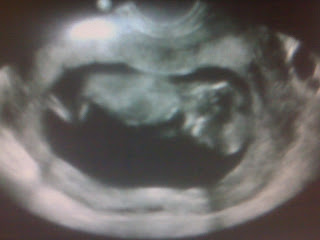 I’ve gained half a pound.  I had my first 1 hour glucose tolerance test to check for early gestational diabetes.  Got those results back last week and I was holding steady at 77!  That’s a really good thing.  Let’s hope it stays that way.