So the idea originally was to find a baby name that had a “th” in it that would compliment Theodore/Theo.

The only ones I could really come up with was:

Nice, right?  Meredith and Theodore.  Not only do they both have the “th,” they both have the “d” sound and the “r” sound – they are even the same number of syllables.  The name is classically familiar but not overly popular.  I like it.  But what I don’t like about it is that the nickname would surely be Mer or worse, Merry/Meri.  Looking at it, those don’t seem so bad but I don’t love “Mary” for my baby and that’s what people would think her name was if they heard me talking to her.  I know, I shouldn’t care what other people think.  But these are the thoughts that dance around in my head so I’m letting them dance around on my blog.

Okay, Anthony isn’t too bad alone.  But again, the nickname situation.  If we gave Theodore his name with the intention to call him “Theo,” I just feel obligated to do the same for baby #2.  I don’t like “Tony.”  What other nicknames are there for Anthony?

I actually kind of looove this name (alternate spelling of Edith) with the nickname Edye.  How cute is that?  “Edye/Edie and Theo.”  It’s got the oh-so-desirable, but not so obvious (with the nickname) “th.”  Problem: the dada kind of haaaates it with the “y” spelling and isn’t hog wild about it, even with the “i” spelling.  I can just picture EDYE’s little name in block letters on her wall above the crib.  (The 2nd crib we purchsed in a year, that is).  Ay ay ay.  Trying to choose a name is more fun and more frustrating that picking out cribs, by the way.

Weird, I know.  My sister came across this name in a book.  It’s a girl name by the way.  I initially rejected it mentally, then I said it a few times and it grew on me.  I definitely would not have to worry about my kid having the same name as anyone else in her class – ever!  But nicknames?  Zanny?  I don’t know about that.  And it doesn’t matter because the dada HATES it with a passion.  Reminder:  I have to carry the kid for 9 months.

That’s the end of the “th” names for now.

Here are some others that could potentially be up for grabs, supposing I let go of the “th” dream.

We both kind of fell in love with this name after hearing it on the show Parenthood.  Couple of hang-ups:  1.  Nickname “Cros” is not so bad to use casually, but would I hang it in block letters over my baby’s crib?  No, it would be Crosby.  2.  This is totally weird and I’m sure I’m the only one that would ever think it, but we decided on Theo one night while watching the COSBY show.  I fear that CROSBY is too close to COSBY and the boys would get teased.  Stupid, right?  For something a little less paranoid, read on…

I have liked this name for as long as I can remember.  But now that we have a son named Theodore, I can hardly name my kid “Calvin.”  A little too close to ALVIN…Theodore… get it?  I can already hear the “Where’s Simon?”  jokes.

I have also liked this name for as long as I can remember, but I am like the ONLY one.  Really.  I don’t know anyone else that supports me in liking this name – including the only person whose opinion really matters.  Sure it’s common…I get that.  But it’s not popular.  How many babies do you know named Jayson?  I like to include the “y” because the baby’s paternal grandfather’s middle name is Jay and I think it would be a nice way to honor him.  No dice.

Ah, Vivienne.  I was in luuurve with this name for years, literally.  I swore my daughter would be named Vivienne and yes, her block letters above the crib would be “VIVI.”  What a sweet nickname.  Then, that skank Angelina had to screw everything up.  I’m talking about Angelina Jolie.  She named her twin baby girl Vivienne and the name’s popularity has sky-rocketed ever since.  I’m afraid that by the time my daughter got to Kindergarten, there would be two other Vivis in her class.  I had it first, Jolie!  I’m afraid Vivienne is off of my list.  So sad about this!

I sort of love this name.  It got brought up in conversation when my husband mentioned something about his co-worker while I was pregnant with Theo and before we knew he was a boy.  I immediately liked the sound of the name, and I think the nickname is super-cute.  Brynn or Brenn, depending on the spelling.  My hubby, however, has a hang-up about naming his child after his co-worker.  I tried to explain that he wouldn’t be naming her after his co-worker.  Besides, if you were this said Brenna person, would you be offended if someone said “I liked your name so much that I named my child Brenna”?? I think not!  This isn’t someone that he is friends with outside of work…it’s not like I’d be naming my child the same thing that my best friend or my cousin named their child.  What’s the big deal?

This name is new to our list.  Well, not completely new.  We both liked it before but for some reason, it has really grown on me.  But how would you spell the nickname, pronounced “Bree” … Bri makes more sense based on the spelling of the name but I don’t like how it looks and I wonder if it would get mispronounced.

I like Cameron and “Cami” for the nickname.  I don’t like Cameron for a boy, only if it is a girl.  I don’t know why, but that’s all there is to it.  That being said, I don’t LOVE this name.  But I like it.

NO! I’m not talking about my baby-to-be, silly.  Although, if I were planning an adoption for my unborn child, I certainly wouldn’t think twice about choosing this forever family for my child.  I know that he or she would be loved endlessly.

And Jody, if you’re reading this, don’t even think about asking me to give you my baby!  I know you think Theo’s cute and all, and you can’t have him either.  (Althooooough, if I find myself in this predicament AGAIN a year from now…kidding!)

Seriously, my friends Jody and Angie are hoping to adopt a baby and want to invite the birth parents to be a part of their child’s life – what a wonderful gift from both sides.  I can’t imagine any greater sacrifice or act of love than carrying a child in your womb for nine months and then placing him or her with another family because you know deep in your heart of hearts that you just can’t provide that child with all the things that every child deserves.  On the flip side, I believe that adoptive parents should absolutely allow and encourage their child to maintain a relationship with their biological family so that there are no feelings of abandonment.  From day one, the child is exposed to the reason why the parents chose adoption.  I wouldn’t have it any other way.

Jody and Angie are amazing.  They are like super hero aunts to their niece and nephews.  They bought a minivan to haul their niece and nephews around, for crying out loud!  Do YOU know any aunts or uncles that have done this?  That’s dedication!  Both of these ladies are compassionate and work in a field of service where they give of themselves day in and day out to improve the lives of people with disabilities.  And they have both done this for YEARS.  Because they care.  Because they want to make lives better.  I know that is what they will do for the baby that they ulitmately adopt. 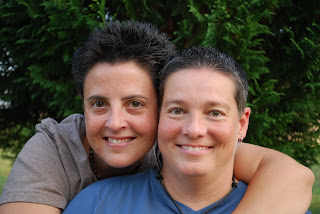 Jody and Angie
﻿I can’t wait to hear that my friends have their sweet baby in their arms.  I am hoping there is a chance that this blog will reach someone who is considering open adoption for their unborn child.  I am encouraging anyone and everyone who reads this, whether I know you or not, to pass along their website, http://www.jodyandangieadopt.com/ to everyone you know.  There is a ton of information about them and loads of wonderful pictures of them and their families on the website and I feel that anyone could get to know them by exploring the site, as it truly represents the fun, caring, wonderful people that they are.
Jody and Angie, I wish you all the luck in the world!
Lots of love,
~C~

I guess (or at least hope) it’s safe to say now that we are expecting another baby!!!

To save you the time and trouble, I’ll go ahead and list the FAQs:

Q:  Heavens to Betsy, so soon!?
A:  Requires no response, as I just told you that I am indeed currently pregnant.

Q:  Well that certainly was quick.  Just how far along are you?
A: 13 weeks

Q:  And how exactly did this happen?
A:  At this time, I would like to challenge you to use your imagination.

Q:  Are you excited?
A:  That’s a loaded question.  We’re working on it and we’re getting there.  There are a lot of issues that are creating stress in our lives right now (I’ll blog more about those later, I’m sure), but we did say we wanted our kids to be close in age (check) and that we didn’t want to go through months and months of trying and hoping and wishing and waiting just to be disappointed again (check).  We need to get some of those issues under control before we are truly jumping up and down for joy.  And I might be too humongous to jump up and down for joy by then, but I’ll be doing it on the inside.  Or someone else will be doing it on the inside FOR me.  🙂

Q:  Are you hoping for a girl or a boy?
A:  Again, loaded question… we can’t decide what would be better (as if we have a choice, haha!).  We always thought it would be nice to have one of each but now that they are going to be so close in age, maybe two little boy buddies would be fun.  Honestly, this time, I can say that I really don’t care.  If he or she is as happy and healthy as little Theo, I will be completely thrilled.

Q:  Are you showing yet?
A:  Not yet. I don’t think…or at least I don’t need maternity clothes yet!

Q:  How have you been feeling?
A:  Exhausted.  Nauseated.  More exhausted.

Did I miss anything?

*I know, I know… “you aren’t supposed to answer a question with a question” and “there’s no such thing as a stupid question,” but I did and there is.  You just asked it.  Not to mention, it’s a personal question.  Stop being so nosy.  I’m not trying to be rude, really, but everyone asks this and it gets old.  And it’s NOT just because this pregnancy was unplanned.  It got old when I told people I was pregnant with Theo.  Unplanned does not mean unwanted.  Lesson:  When someone tells you they are pregnant, the appropriate response is to say “How exciting!  Congratulations!” rather than ask a nosy, personal, none-of-your-business question.  P.S. I am just as guilty as anyone else of asking this question in the past.  Never again (unless you are my best friend and I know you won’t be offended – but if you are my best friend I would probably know if you were planning, right?).  Lesson over, class dismissed!