Tuesday I got a text from the babysitter and she said Theo had a slight temp and was acting a little whiny and clingy. Figures, because we had family photographs scheduled for that night. She said not to cancel our plans and that he’d be all set to go at our pre-discussed time.
I got there at 3:45 and by the time I arrived, he was insisting on being held and immediately started crying when he saw me, collapsing into my arms. I pulled out all the stops on the way home, trying to get him to smile. Nothin’.  I knew by the time we got home that pictures would be cancelled. We rescheduled for Thursday. I checked his temp and it was 99.0. Nothing too concerning. By about 8pm it was over 103 and he was totally miserable. He spent the whole night lying on us, crying, and drifting in and out of restless sleep.
He finally went to bed for the night at 10 and surprisingly slept through the night.  Theo woke up with a 100.9 temp, which went away with ibuprofen and never returned. He was happy and playful and seemed like himself again. I marveled at how quickly little bodies can heal themselves.
I was almost certain that the fever was from teething. It was obvious that he had some discomfort as he was chewing on his fingers and holding his cheek. It just wasn’t adding up because every website I consulted said that teething never causes fevers that high. I also noticed that his appetite was nearly gone, which was concerning.
Thursday morning when he got up, I was rubbing his bare back and it felt bumpy.  His lower eyelids also looked red and he was really grumpy. It just wasn’t sitting right with me so I talked to a couple people and they urged me to call the doctor in case it was something contagious that might spell trouble for Dexter. Sure enough, they wanted to see him to rule out a virus.
I took him in and the doctor looked and him and listened as I explained the events of the past couple days. He said the rash was too widespread to be sun-related and took one look at his throat before confirming that he did indeed have a virus. Dang.  What about our photo session?
Aside from still not eating much, he seemed to feel fine so I warned the photographer and we decided to meet a little earlier than originally planned in hopes that everything would pan out. I’m not sure how our session went, but it went.
I’m feeling a little smart and a little stupid all at the same time. My husband wasn’t concerned and thought I was being overly paranoid. Okay, he didn’t say that but I know he was thinking it!  So anyway, I’m glad I trusted my mommy instincts when they were telling me something wasn’t right, but I feel like a moron for not having a clue that it was a virus. Heck, I don’t know if I’ve ever had a virus. How am I supposed to know what they look like?
Now we just have to make sure that Dexter doesn’t get it. The doc said if he does get it, he’ll have to be hospitalized. I hope it’s not too late.
this is not a fun first,
~C~ 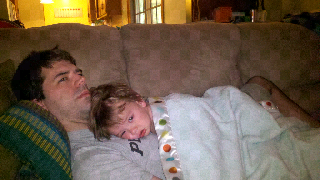