We’re still staying with Ryan’s parents, and they have a huge driveway with a long hill.  The boys love driving their riding toys up and down the hill.  Dexter was feeling pretty good about swooping in and calling dibs on Theo’s current favorite – the Radio Flyer tricycle.

Theo didn’t care, he’d already called dibs on the Cozy Coupe police car.  He likes both the Radio Flyer trike and the Cozy Coupe because they both have a little “trunk” he can keep his collection in.  His collection changes from day to day.  On this day, it was Chuggington die cast trains.  Some days it’s screwdrivers.  Some days it’s coconuts.  And by coconuts, he means acorns.

We’re enjoying mild weather, so as the boys played, I admired my mother-in-law’s new decorations.

I remembered that we had yet to open one of Theo’s belated birthday gifts.  It was so hot all summer so I never bothered with it.  My sister got him a little bubble mower.  This thing is so cute and it does not require batteries (and can I get a HOLLA for tool-free assembly?). The boys LOVED it.  It didn’t take long before the dear ol’ Chuggington collection was tossed to the ground.  Sad situation.

Dexter was watching Theo dart across the yard with the mower.  I was staring at Dexter’s curls, debating whether I should cut them off or not.  Guys – his hair is so long.  Ponytail long.  No lie. But it’s so cute and so curly and so blonde. And that’s his “whatchu talkin’ about Willis?” face – the one he gave me when I told him to give Dexter a turn.

So…flashback to July 27, 2012.  The day we closed on our house.  We had mixed feelings about the house. We went to closing.  As we were walking up to the building, we (sorta) jokingly said, “let’s run. What if we don’t go in?”  We knew that the house needed SO much work.  A complete remodel.  We signed our names a billion times and the house was ours.  Then, the seller sat back in his chair and told us, long story short, that the basement leaked.  The finished basement leaked.  The same basement they referred to on the sales disclosure that said there was no history of moisture in the basement.  We asked a couple of questions…no one seemed to think anything was out of the ordinary.  We were shocked and to be honest, the gravity of what that man said didn’t really sink in at the time.  It would take a couple of hours.

We went to a Japanese steakhouse for lunch to celebrate and then to a home improvement store to buy some new locks.  Always the first thing you do when you buy a new house, right?  It started raining while we were in the store – we left there and went straight to the house.  We went down to the basement and there it was.  A puddle of water in the corner beneath the window.  UN. BE. LIEVABLE.  Our hearts and stomachs sank.

We talked to realtors. Attorneys.  Friends.  Family.  We were devastated.  We found out that the basement was going to cost thousands and thousands of dollars to repair.  We sent a letter to the seller and they responded.  2+ months later…. I’m happy to say that we have cashed a check from them for the repairs and we didn’t have to sue them. I don’t know if it was out of kindness or fear that they settled outside of court.  Maybe both.  Doesn’t matter.  All that matters now is that the basement repair people know what the heck they’re doing and our basement doesn’t leak anymore.  We had to remove carpet and drywall and decided to just let it sit unfinished throughout the winter to see if there is any more leaking.  Fingers crossed that we can actually use that additional 1,000+ square feet.  If we can’t, then this house was a total waste of money and we should have followed our guts when we were walking through the door at closing.  Turn around. Run the other direction.

I guess we got lucky.  I am pleased that they agreed to pay.  There will always be the fear that the basement will leak again every time there is a big rain.

We still haven’t moved in.  We are having carpet installed in the bedrooms this weekend and plan to move in sometime soon after that.  As soon as we can get things put away and furniture re-assembled.  I think Theo is starting to understand.  He knows that’s our house, and that we’re working on it to make it nice so we can live there.  I don’t know what Dexter thinks about it…he just sees it as a big open space to run and play in.  That’s really all we wanted for them anyway.

Wish us well…we need to be together as a family.  Working on the house and not spending a lot of time with the boys has been hard on all four of us. 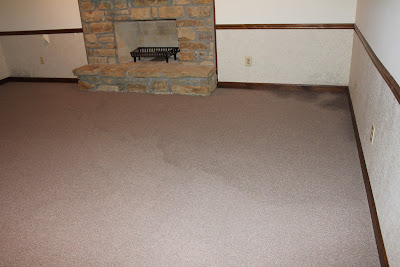 The day we closed. 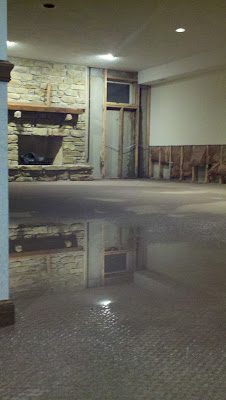 After a storm on September 7th. 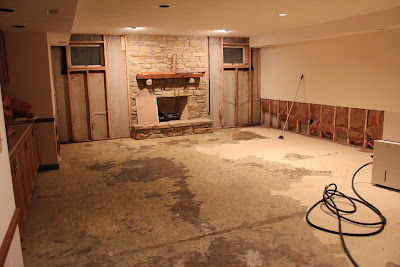 How our basement looks now.  Not exactly the vision we had for it.
I look forward to the day I can post pictures of our finished basement…many months from now.
~C~