We had big plans of going to Tennessee to visit our one-week-new niece, Penelope, this weekend but both boys had colds and by Friday, it seemed that Theo’s was getting worse instead of better.  Turns out, it’s just a junky cough that has not changed one.bit. since late Thursday night.  He acts like he feels fine so who knows if it was/is anything contagious.  Dexter hasn’t (yet) developed a cough.  We worried about the car ride, them sleeping somewhere else, and mainly, that Penelope would catch it.  As much as I wanted to go to Tennessee, I knew the right thing to do was to stay away from a 5 day old baby while the kids were not 100%.  Despite being super bummed, we made the most of our weekend.  Friday afternoon the weather was nice so we took the opportunity to play outside and go for a quick wagon ride.  Unfortunately we only made it about four houses down the road where a few neighbors were gathered, chatting. Even though I really wanted to bust on down the road and burn some calories, I stood and chatted for a few minutes as well.  Afterwards, Theo was ready to go back home. 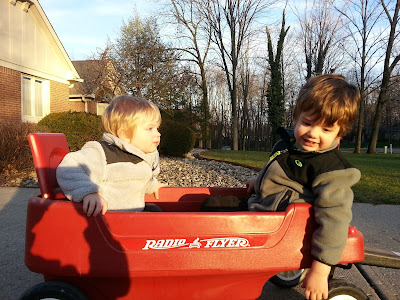 Saturday we mainly relaxed around the house doing stuff like this:

then ventured out at dinnertime for Cheeseburger in Paradise.  COASTAL TACOS, y’all!!

I remembered a Groupon I bought for a bouncy place so we took advantage of that today.  The boys just loved it.  I was excited because I remembered taking Malachi (my nephew) when he was three and sweating to the oldies right there with him.  I figured we’d all get some exercise.  I was figured right about that part.  I figured we’d stay for about an hour. I figured wrong.  We were there almost two hours.  I was begging the boys for a break, “hey, aren’t you thirsty? Don’t you need a sip of water?”  Really, it was a lot of fun.

After almost 2 hours of bouncing, we went across the street to Bajio, where we had a coupon. Can you tell I love a deal? 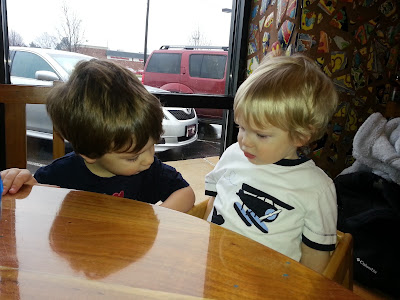 Woody was the only one that didn’t have a hard time staying awake on the way home.  Also? Maybe one of my favorite pictures. EVER.

It was almost 2 by the time we got home and the boys were bushed.  I have been telling myself since January 1st that I was going to re-join the gym.  I snuck back out as soon as we got Dexter in bed and joined the Y. 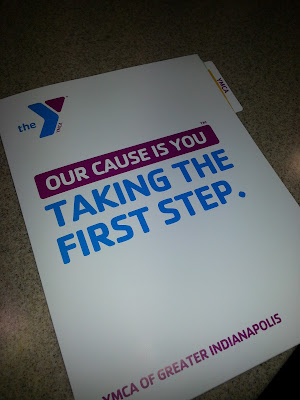 Since I had worn my yoga pants to the bounce place, I figured I may as well take advantage of the facilities and get in a little work out.  I only did 35 minutes on the elliptical.  I only burned 220 calories.  I kept telling myself how pathetic it was that this was wearing me out. Then I pep talked myself (silently of course).  Although I was struggling, at least I was making myself do it.  It felt good to move my body instead of spending the boys’ nap taking a nap myself.  Those 220 calories are the only ones I’ve burned on purpose since Theo was about 4 months old.  Those 220 calories made me sweat like I haven’t since Theo was about 4 months old.  Seriously.  The more I thought about it, the prouder I felt of myself for taking this initiative to take back control of my life.

I was active with my kids today. It was fun.  I did something for myself by working out and I felt accomplished afterwards.  I don’t want to be skinny minny, I just want to feel good. I want to have energy left at the end of the day to do something besides just lay on the couch playing dumb games on my phone.  I want to be able to wear shorts at Disney World in the fall and not feel disgusting.  I’m trying.  And that’s the most I’ve done in a long time.