﻿We’ve got a couple of exciting things already planned for this year.  First and foremost…we booked our fall family vacation to Disney World!  This has been a long time coming and I couldn’t be more thrilled.  So thrilled, that I’ve started contemplating how all of this build up is going to crash and burn the day we come home.  Two years of waiting for one week of fun.  Yikes.

Anyway, some details are already planned and there will be lots more planning to come.

We’re staying at the Art of Animation Resort on Disney property.  Staying on property is a no-brainer.  Wonderful transportation between all the resorts and parks and to and from the airport.  No need for a rental car and no cost for parking at the parks.  It’s a value resort (the cheapest rate for Disney resorts).  We contemplated staying at a moderate resort (the next price category up) since we knew we would be spending more time at the resort than in past trips. However, once I looked at the AoA resort online, I knew this is where the boys would have the most fun at the ages they will be (2 1/2 and 3 1/2).  An entire section of the resort looks like Radiator Springs from the Cars movies, which they both love.  You can stay in the Wheel Well Motel, just like in the movie.  It’s a big family trip – my mom, Ryan’s parents, and Ryan’s sister and her family are all going.  We opted for family suites in the Cars section and requested to be in adjacent rooms.  Each suite sleeps six, has a kitchenette, master bedroom, and two bathrooms.

We made sure to build in plenty of time to rest.  When Ryan and I went 6 years ago, we were exhausted!  Walking from 8am to 10pm or later every day wears on the old body, and while I hope to be in much better shape by the time we go than I am in now, I’ll still be 6 1/2 yrs older than I was last time. Plus, I’m sure the kids won’t nap much (if at all) at the parks and I don’t want to waste time going back and forth. Days off will let us catch up on some needed rest.

Currently debating flying vs. driving just because airfare right now is $300+ per person.  That’s over 12-hundo for all of us.  My time is definitely worth some money, considering that it’s a 2+ hr flight and a 16+ hr drive.  But I don’t know if it’s worth $1200+.

Friday: We will arrive and unpack, tour the resort, and enjoy some R&R.  Maybe head to Downtown Disney for dinner.

Saturday: We will go to the Magic Kingdom first thing.  Ryan wants the boys to see Cinderella’s castle first since that’s what they recognize as being Disney World.  We may or may not stay there all day – we got 4-day Park Hoppers so we can change things up.  I don’t think we’ll spend an entire day at Epcot and Ryan’s parents aren’t interested in going there.  They won’t arrive until sometime Saturday so this would be a good time for us to see Epcot.  It will be fun for the boys to ride the monorail between parks.

Sunday:  We plan on spending this day at the resort.  Hopefully the weather will be nice for swimming.  If not, there’s always Downtown Disney.  We are going to take the boys to a character breakfast one day and I think it would be ideal to do this on a day when we don’t have anything else planned so we’re not rushed.

Tuesday:  Resort.  Ryan and I have talked about leaving the boys with the grandparents one day while we drive over to Universal Studios’ Islands of Adventure for a date day.  🙂 We’ll see how we feel abou this once we get there.  Ryan’s parents are driving down so we’ll have access to a car, which will be really nice.  We’ll be able to make grocery store runs and eat some breakfasts & snacks in the room since we’ll have our handy dandy kitchenette available.

Wednesday:  A park.  Animal Kingdom perhaps. I’m not sure if we’ll spend a whole day there and I know they close earlier than other parks, so maybe we’ll go back to Hollywood Studios. We want to save an entire day for Magic Kingdom. It would be kind of sweet to start and end our trip there.

So that’s all I know for now.  It’s really exciting that this is in the foreseeable future now…instead of 2 yrs away like it was the first time I wrote about it.

We’ve been enjoying some yummy new treats, courtesy of my new Zoku quickpop maker.  I’ve been wanting this thing for at least a year.  When I finally got it for Christmas, and read the instructions, I thought hmm….maybe this was dumb.  But turns out, it’s not complicated at all and these pops are so GOOD!  The boys love them (and so do I).

Aunt Michelle and Uncle Bob popped into town to pick up our nephew Spencer, who had been staying with Ryan and Michelle’s parents…the beloved duo of Nana and Pop Pop, since New Year’s Day.  Theo and Dexter had a blast playing with Spencer.  They loved having a sleepover!
Saturday we went to Shapiro’s, a well-known spot in Indy, for lunch.  We chowed down on some giant sandwiches (I watched my portions, y’all!).

this kid, however, cleaned his plate!

Nana and Pop Pop’s three grandsons sure do love them!

And everyone loves Dexter.

OH and one other thing that popped this weekend…..
My sister had her sweet baby girl, Penelope Quinn today January 6, 2013.  I am bursting with joy and excitement for them and wallowing in a little self-pity at the same time because I’m not there.  I now have 2 nieces and 2 nephews and this is the first time I wasn’t there, at the hospital, for the birth.  SAD!  Even sadder because there’s a 99.999% chance that this was my last chance to be there for a niece/nephew birth.   Without further ado, Penelope, Isabella, and Malachi. 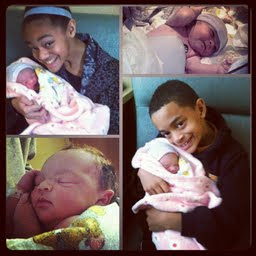 I said I was behind, now I’m going to try and catch up a little and get back to focusing on what this blog is all about – my family, the fun we have (and sometimes don’t have), and how the boys are doing.  I think I have some more room on this blog for photos as long as I upload them to some other website before I load them here rather than uploading them here straight from my memory card.  We’ll see.

For Thanksgiving 2012 we made the loooong trip to Knoxville, Tennessee.  What was supposed to be a 6 hour trip turned into 8+ thanks to a bad wreck on the interstate.  The trip home was just as bad.  The kids were great in the car for the most part.  So great that we entertained the idea of driving all the way to Florida later this year.  More about that some other time.

Anyway, we made it.  We ate.  We hung out with friends.  I forgot to take pictures most of the time, but I did snap a few.

Dexter’s just hanging around while {my amazing niece} Isabella plays on the computer.

Theo enjoyed the Christmas tree and spending time with his cousins, aunt, uncle, and grammy.

We hadn’t been to Tennessee since last Christmas so this was my first time meeting precious Giada Claire.  What a doll.

My mama and her first grandson.

Aunt Cher and her cutie nephews.
That’s the quickie recap.  Hope your Thanksgiving was great too (you know, two months ago).
xo,
~C~