Theo has been a bit of a handful at times lately.  In case you don’t know what that means, it’s a gross understatement.  Use your imagination.  I literally started reading parenting classes curriculum in search of some magical remedy, not to mention wondering what the heck we’ve done so wrong thus far with discipline and whatnot.  He’s just a moody, sensitive child that needs structure, routine, and hard rules sometimes. Dexter has never been that way. At Dexter’s 2 year check-up we told the doctor that Dexter has been a breeze (as far as behavior is concerned) compared to Theo.  He was surprised that Dexter wasn’t in the midst of full-blown Terrible 2s and we said “hey, don’t jinx us dude.”  Or something like that.

Mr. Dexy Poo has been giving us a run for our money these last few days.  Crazy fits, ear-piercing screams, not listening, telling us he does things “because I want to” after we ask him why he’s throwing this or breaking that, etc.  It’s been a little nutso.  Luckily, Theo has been a dream this lovely long weekend.  Helpful, sweet, and so smart. I think he’s really matured a lot lately. His thought process has been changing.  His understanding of more complex matters is increasing.  It’s so fascinating to observe and participate in all these changes.  Good thing, because I don’t think I could handle tantruming toddlers x2.

Sunday morning we were trying to get out the door and Dexter was underfoot in the kitchen. The kid would NOT get out of my way.  He was opening and slamming every cabinet door and drawer.  I sternly told him to stop or leave the kitchen and he started screaming back at me. WHO IS THIS KID?  Theo walked over to him and patted his back and said “Dexter, Dexter, don’t do that.  Be nice. I’m trying to save you.”  I had to laugh and ask Theo what he was saving Dexter from.  “Getting in trouble,” he said with a smile.  He’s becoming such a good big brother.

Dexter is now just shy of 2 years and 1 month old and we’ve seen no sign of a 2 year molar yet.  But he’s super crabby and protests toothbrush time pretty consistently so fingers are crossed here for some big ugly teeth making their way through sometime soon.

I’ve had that dang Doc McStuffins song stuck in my head for weeks. So random since my kids don’t watch it. I secretly try to push it on them because I think it’s such a cute show.

That’s totally not the point of this post.  I’m just a little bit behind on thing that have been happening so I wanted to jot a few things down. 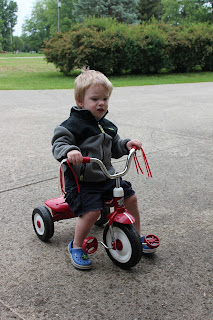 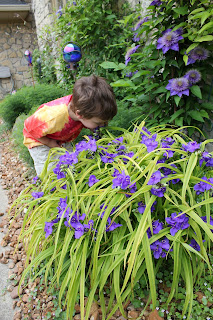 Last Monday Dexter peed in the potty!  He always pees as soon as I put him in the tub for a bath so I try to remember to sit him on the toilet first. Never worked before, but he’s peed on the potty a few times since Monday.  I’m not ready to go full force potty training him because I think he can control releasing it. But not holding it.  I know that makes no sense to you, but it makes sense to me. I told Theo that I hoped he started pooping on the potty before Dexter did and guess what? Wednesday night, Theo pooped on the potty at home for the first time.  He did it once on April Fools Day (how appropriate) at the babysitter’s but this was the first time at home. He hasn’t done it again but hey. It’s some kind of progress.  Hard to believe my little pals are getting so big.

Oh, and Dexter says “peed” for pee “peeding” for peeing.  I guess because he so often hears “peed in the potty.”  So now he says “I’m peeding!”  It’s really funny and cute. No?  Guess you have to be there.

In the car, Theo oftentimes will ask me why Dexter does something or doesn’t do something and I’ll direct him to ask Dexter.  It cracks me up when Theo says Dexter’s name repeatedly until Dexter makes eye contact with him. This isn’t easy to do because they both have to kind of look around the sides of their carseats to see each other.  If Dexter doesn’t look at Theo or say anything, Theo will say “Dexter, say ‘what'” before asking his question.  Dexter ignores him half the time to push his buttons – I know this because he gets a very mischievous grin on his face.  Dexter has a lot of faces.  I’ll have to try to get some of his trademark smirks on my camera because I sure don’t want to forget them.  Theo even knows the faces now, because he’ll say “What is THAT face, Dexter?”

Theo’s picked up on a lot of the things I say.  I’ll ask him a question and he’ll answer “I have no clue” or “I have no idea” and I’ll think to myself, where did he hear that? Not five minutes later, I’ll realize I’m saying it too.  Cute.

I have a cold and it’s really been annoying because I was so determined to complete C25K before this Saturday, when I run my first 5k.  I tried to run yesterday and only made it 15 minutes.  Week 9 Day 1 of a 9 week program and I had my first failed workout.  I just couldn’t breathe and figured it wasn’t worth pushing myself and making myself sicker.  From the beginning, I’ve said I would repeat any failed workout but I definitely won’t finish if I do that.  We’ll see what happens with my cold the rest of the week, but right now my main priority is just getting better by Saturday morning at 8am.  I think I’m going to be really disappointed in myself if I don’t run the whole thing.

Ryan and I are heading to Kings Island for a fun date day tomorrow!

Par for the course, I’m a little bit behind on posting about Dexter’s birthday.  His celebration lasted for about a week with several separate mini-celebrations.

His birthday was on Monday 5/13.  On the Saturday morning before (also the day before Mother’s Day…busy weekend!), we met a friend at the bounce house and they played for maybe an hour and a half. 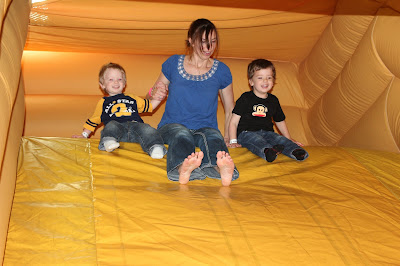 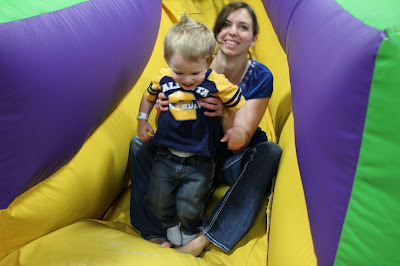 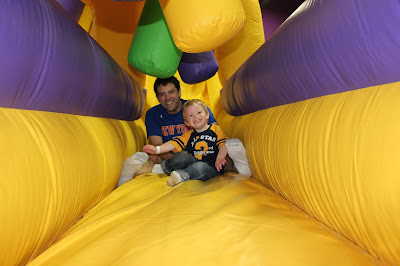 Afterwards, we had lunch at McAlister’s and took the boys home to put them in bed. 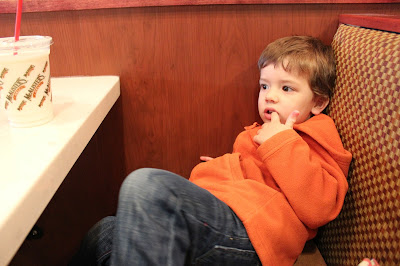 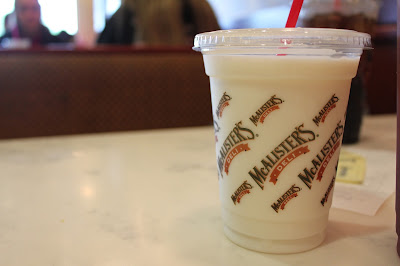 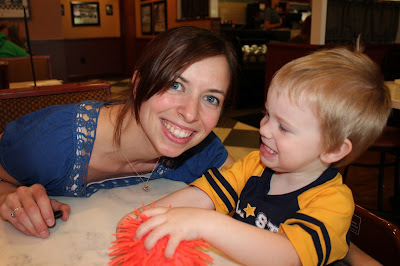 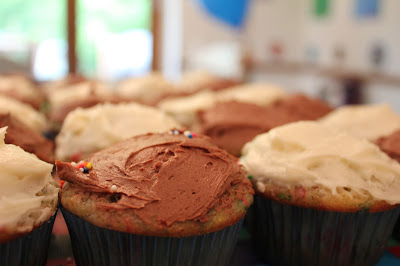 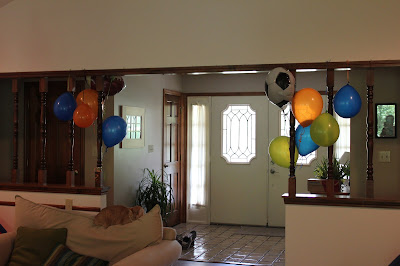 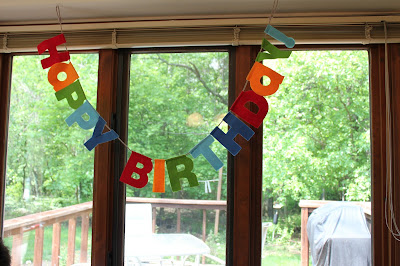 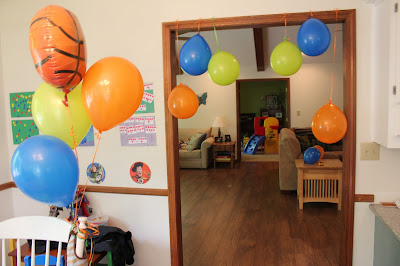 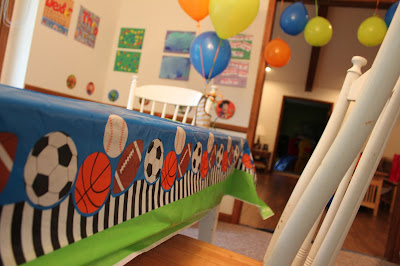 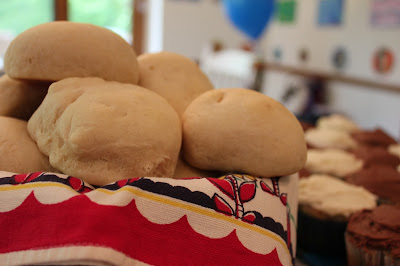 Of course there were gifts and big brother “helping” Dexter open them.  If that’s what you want to call it.

Theo helped Dexter pick his ice cream… mint chocolate chip.  Why?  Because Theo is obsessed with GREEN.  All things must be green.  So when we were at Target the night before and Theo was begging for green ice cream but we told him that ultimately it was Dexter’s choice, sweet Dex had mercy on Theo’s soul and conceded.  Turned out to be quite delicious.

It was nice enough to play outside for a little bit, despite being a little chilly for MID-MAY. Come on, weather. Get it together.

Dueling lawnmowers.  Gnomeo and Juliet, anyone?

On Monday, Dexter’s actual birthday, I decided to forego sending any treats to the babysitter’s house, as cruel as I felt, due to the amount of JUNK that had been consumed over the weekend and knowing that we were having friends over for a cookout that night.  Some good friends that live nearby helped us celebrate yet again.

On the Thursday after Dexter’s birthday (5/16) we drove down to Pigeon Forge, TN and met up with my mom, sister, and her family at a cabin.  We spent Friday at Dollywood as another quasi-celebration of Dexter’s birthday.  I had intended to have more cake, more ballooons, and more ALLTHATSTUFF but I think we were all sort of partied out and caked out.  So we settled for more presents and lots of family time.  Perfect way to cap Dexter’s week-long, two-is-terrific, birthday hurrah. 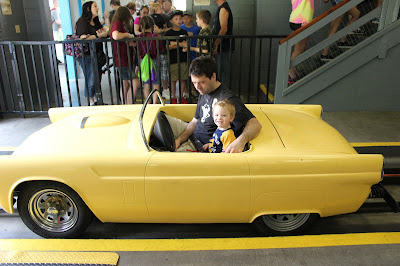 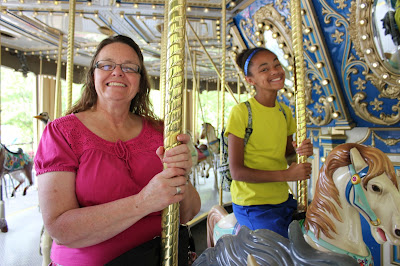 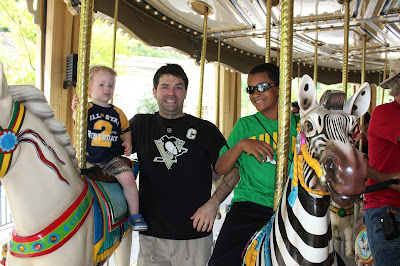 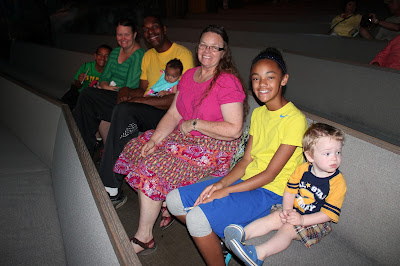 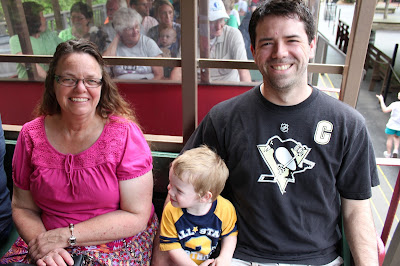 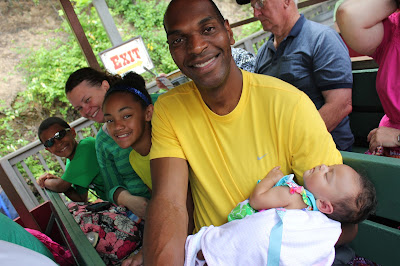 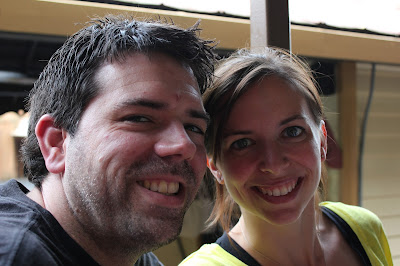 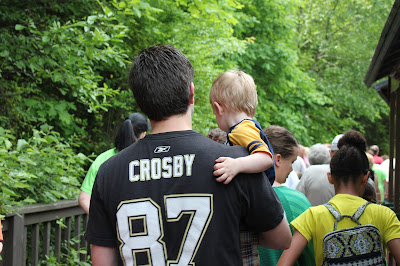 So as you can see, we’ve been a bit busy. I have much more from Pigeon Forge and Memorial Day weekend to share, but I’m trying to do things in order.  And yes, we intended to get our money’s worth out of that 2nd birthday shirt Dexter’s wearing in the majority of these pics.  It paid off because as we were eating at Miss Lillian’s Chicken House (at Dollywood), Miss Lillian herself sung Dexter a very special birthday song. Extreme fun!
So that’s sweet Dexter’s birthday.  A special week of fun for a special little boy!  Not quite the huge circus-themed bash we had last year (here, here, and here), but it was perfect to all of us.  🙂 Loving having these 2 & 3 year olds.  It’s definitely a different stage, but so much fun.
xo,
~C~