Read the previous updates and see the previous photos here.
My goal starting out in January was to lose 20-24 pounds and remain in that range.  I’m happy to finally report that I made it! I have been in this range for about 3 weeks now.  I lost about five pounds in a couple of days when I had strep throat at the end of April, and gained a couple of them back.  Here I am in January (after my first trip to the gym in 2 or more years) and after my run tonight: 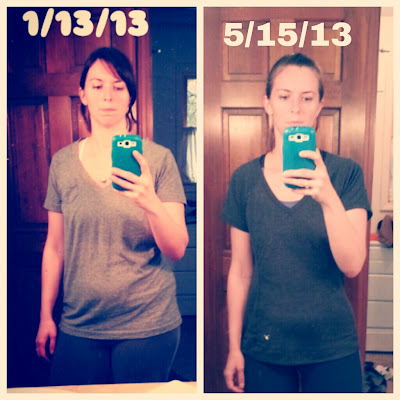 I feel much better, but I still have work to do.  I still feel squishy.  I want to feel fit.  I feel healthier but I don’t necessarily feel like a fit person.  Strep throat threw me off track with Couch to 5k and I still have not completely gotten back on track.  And now I’ve lost track of whether I’m just one week behind or two.

I WILL finish Couch to 5k by the end of May.  I will make it happen.  Why?  Because I’ve registered for my first 5k on June 1st!  I’m excited and a little nervous.  I’ve made a lot of progress considering that I struggled to run for 1 minute at a time when I started Couch to 5k and now I’m struggling to run 28 minutes…but I’m doing it!  I loathe it during sometimes, but afterwards it is one of the best feelings in the world. Truly!  I think I even saw a glimmer of a calf muscle tonight. I’m running outside more than inside, which (for me) is much more difficult physically.  The treadmill is boring though and I tend to stare at the clock, so either way it’s a challenge.

Tonight was the first night I had to run 28 min. The last three runs were only 25. Doesn’t sound like a huge difference but you better believe I threw my everything into those last three minutes while I was jamming out to Alicia Keys’ Superwoman because I wanted to quit. Bad.  It was hot.  The path I chose was very hilly.  I had just eaten dinner.  It was rough and I was super slow. But I made it without walking. Woo! Afterwards, I was anxious to find out if I ran further than I had the previous week and sadly, it was the exact same.  Given the environmental challenges, I’m not beating myself up about it too much since I did finish without stopping (and that’s my goal for the 5k, not speed).  But it would have been nice if I’d gone further than the 2.2mi that I have been running for the past week in 25 minutes.

Long way of saying I got behind, but I haven’t given up. There’s a light at the end of the tunnel. I only have 5 more Couch to 5k workouts remaining and I kind of don’t know what to do with myself once that’s over. Aside from walking, this has pretty much been my only exercise since I started it 9-ish weeks ago.

Suggestions?  I get bored going to the gym and doing cardio & weights.  I’ve thought about P90x but we don’t have a great place for that until we get the basement finished.