Hard to believe it’s been almost 6 months since The Babysitter of the Year told us she was quitting. Closing. Whatever.  That was truly one of the hardest things we’ve been through as parents.  Stressful. Unexpected. Struck fear in my heart and opened me up to a world of uncertainties and insecurities.  On July 1st, we took them both to a new in-home sitter and on August 7, Theo started attending Montessori pre-school three days a week.

How’s it going?
It’s going …. good.  The transition was hard and it took longer than I expected but I can say confidently now that things are good.  Am I glad now that it happened this way?  Not necessarily, no.  The boys still miss her. I miss her. I miss her kid. The boys still talk about her.  The current situation is that Dexter goes to the new sitter every day and Theo goes there on Mondays and Fridays.  Tuesday, Wednesday, and Thursday he is at school.  Not too long ago, after a day at the sitter, Theo was going on and on about his day and the fun that he’d had.  I asked him if he liked school and he said yes.  I asked him if he liked the new sitter and he said yes.  I felt my heart grow warmer as a peace settled over me.  Then, like a moron, I asked him if he had to choose, where he would go every single day.
He paused, and then said “I would go back to E’s because that’s the best place for me.  I know that’s the best place for me.”
And then my heart about shattered into a million pieces.  Months later, he’s still missing her and wishing he could go back.  Me too, son.  That’s not to say that I don’t love his school.  I do. We do.  We all love his school.  His teacher loves him and has great things to say about his growth there.  I have noticed him growing up, acting older, since he started there.  I don’t know if that’s always a good thing, but I guess it was bound to happen one way or the other. I do believe that it’s been good for him to be the youngest kid instead of the oldest.  He’s learning about social cues and rules and expectations.  He’s growing more independent.  It’s been amazing to watch him change in a short time.  But it’s still sad.
Theo was having some behavior issues before this transition and I now deeply believe that it was due to being the oldest and possibly under-stimulated.  E suspected this and told me this the day she said she was closing.  I didn’t want to hear it but the simple truth is that he’s had a handful (or less) of issues since the switch.  Because of Theo’s wacky antics, I really thought if anyone was going to struggle, it’d be him.  He can be downright rigid and stubborn and I knew how attached he was to her. I can only assume that Theo’s ability to verbalize his thoughts and feelings helped him in a way that Dexter was not able to process.
Dexter really struggled more (visibly) than Theo and much more than I expected.  There was a lot of crying every day at dropoff, clinging to me, and not wanting to go. Crying on the way there and begging not to go.  Saying he didn’t like it there. Crying when I picked him up.  I spent quite a few of my drives to work in tears myself, thinking THIS SUCKS.  Stomachaches, wishing for nothing more than to be a stay at home mom.  I have nothing but kind words for the two ladies that care for him, but it’s not the same personal experience that we had with E.  As soon as things started to settle initially, Theo started going to school and we had to go through a transition all over again.  The roughest part lasted about two months. But now here we are, almost 5 months into this and Dexter absolutely loves going there.
This morning, on the way he says:
No, that’s not J’s house.
No, that’s not J’s house.
No, that’s not J’s house.
No, that’s not J’s house.
YAY! That’s J’s street!!
No, that’s not J’s house.
No, that’s not J’s house.
No, that’s not J’s house.
YES! That’s J’s house!!
I pulled in the driveway and reached into the back to unbuckle him from his seat and put his coat on before getting out of the warm, cozy car.  As soon as I unbuckled him, he hopped down from his seat and said:
That’s okay, I go in by myself. Have a good day, mommy!
Excuse me, two year old child?  I think I will continue to walk him in for a little while longer.  Anyway, about 3 out of 5 days a week I don’t even get a hug from him because he’s too busy running off to play with his friends and doesn’t have time for me. I’ll totally take that over the alternative.
xo,
~C~

Wow, it’s already been 2 weeks since my last post.  I keep thinking it’s been awhile but never seem to find the time or the inspiration to come here and write.  I don’t know why. The boys have been super cute and fun lately.  I haven’t been taking many photos either…lame.

They are so smart. I’m surprised every day by something they say or do.  Theo just seems so OLD lately. He’s still super obsessed with Legos. He just loves taking the guys apart and mixing and matching their bodies. We build whatever came in the lego set and then he takes it apart and attempts to rebuild it. He’s pretty good at it!  What I love the most, though, is his creativity. He builds his own little ships and guns and I literally don’t know how he comes up with this stuff.  So neat to watch him.

What’s not so neat is that he is also obsessed with pee pee and poopy.  Like, the words. Not the things.  He thinks it’s soooo hilarious to call people “poopyface” or “fartface.”  I guess it was funny the first time, but now it’s just pretty obnoxious.  I’m not sure if it’s just his age or something that he’s picked up from school.

Dexter, on the other hand, might turn out to be our goody-two-shoes.  A lot of the time when Theo is trying to get Dex in trouble (by telling him to say or do something inappropriate), he’ll say “No Tee-o, we don’t say that.”  He’s got a little conscience on him. Theo is starting to tell white lies, denying that he did something or blaming things on Dexter.  He’s not a very good liar.

Speaking of peeing and pooping though, for the longest time Theo wore a diaper to bed just because we were so paranoid that as soon as he started wearing underwear, we’d be back to the newborn days of getting up 5 times a night.  Before he wore underwear to bed for the first time (on Nov 2), he had NEVER in his life woken up dry in the morning.  I was curious if he was just peeing when he was awake because he knew he could or if he was actually peeing in his sleep.  We’ve pretty much figured out in the last three weeks that he CAN NOT and will not make it through the night unless we wake him up to take him to the bathroom before we go to bed (about 3 hrs after he does).  We’ve experimented and he always has an accident in the middle of the night if we don’t take him. Sometimes he’ll have 2.  So, what do you do?  Do you wake him up every night (a nuisance for everyone) to start teaching him or do you blow it off and let him keep sleeping in diapers?  For now, we’re taking him to the bathroom at midnight and celebrating successes every morning that he wakes up dry – which is the majority of the time.  I figure he’s going to be four in a little over three months…we’ve got to get a handle on this. Right?

We’ve been lazy with Dexter’s potty training.  We need to be more consistent but here’s the thing. He consistently pees on the floor almost every time he wears underwear. He has some GREAT days, but he has some bad ones too.  I know that’s too be expected. Does it make me a bad mom if I just don’t want to clean up pee off the floor or risk him peeing on the carpet or the couch?  Yeah? I kinda thought so. We’ve got a little time with him – I’d like for him to be trained (at least for the daytime) by the time he’s three…still six months away.  Dexter is more than happy to tell you after he’s gone but very rarely asks to use the potty before he goes.  I think with more consistency on our part, potty training him will be easier than it was with Mr. Stubborn Theo.

That was a lot of potty talk, considering I didn’t even know what I was going to talk about.

I think that’s all for now.

In the springtime, I have the boys outside at every given opportunity, just because I’m full of glee that winter has come to an end.  They love it, I love it, everything’s peachy.  Then sometime in July or August, it gets so insanely hot that you can barely breathe while walking to the mailbox so you can forget about playing tag and running circles around the house.  The only way to play outside is in a pool or lake.  After that, there’s about 5 minutes of nice, fall weather before blizzard season sets in for 9 months.  Okay, like 6. Fine, 4.  Or whatever.  Anyway, we’re in the 4th minute of fall right now and I’m acutely aware that soon I will be right back in that there’s-no-way-in-hell mode when asked to play outside.

But now that Theo’s engrossed in Legos and they are both obsessed with Disney movies, some days they don’t even show any interest in playing outside. Lame.  So today when Dexter asked to play outside after we got home, I scrapped any plans for a decent dinner in exchange for spending the last hour of daylight with my baby boy outside. Theo enjoyed playing in the leaf pile I raked until he’d destroyed it, then he was pretty much pouting until I let him go inside to play Legos.  I checked on him intermittently before dragging Dex back in so I could pop those frozen corn dogs in the oven for dinner.  So what? They loved it.

Oh, and as Dexter and I were putting toys back in the garage, Theo opens the door and asks to go on a wagon ride.  I was happy to hear that he’d changed his mind, but told him it was too late. At least I did something I’ve been FAILING at lately – I remembered to grab my camera to capture a few cute fourth minute of fall moments. 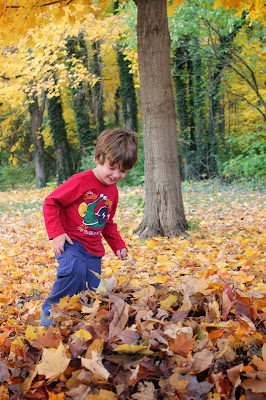 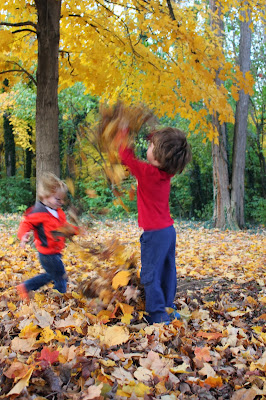 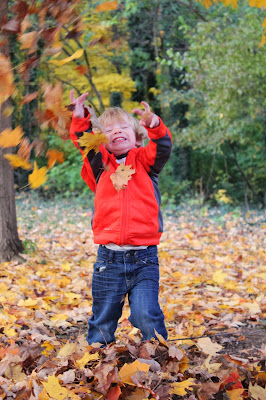 The purest, sweetest, most innocent joy. 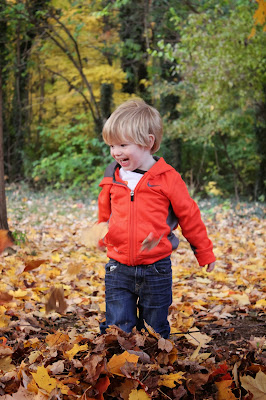 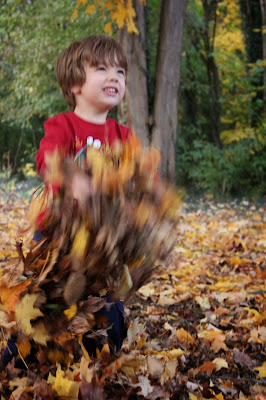 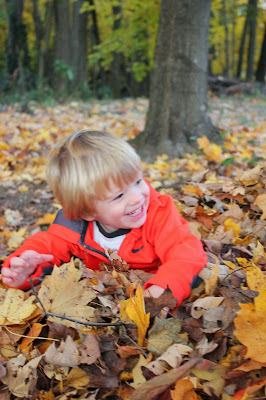 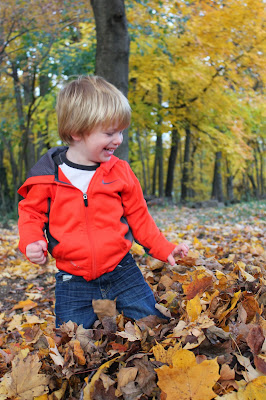 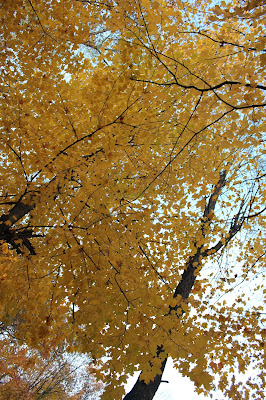 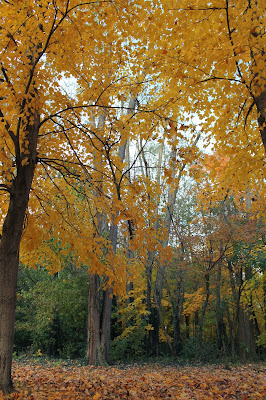 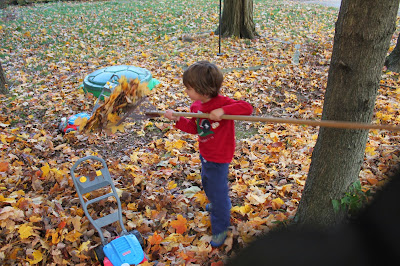 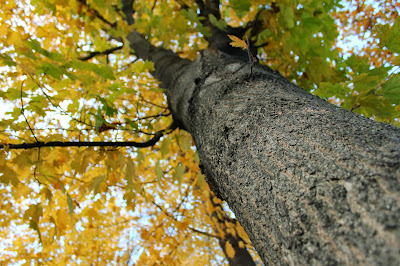 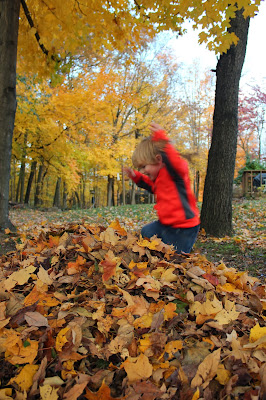 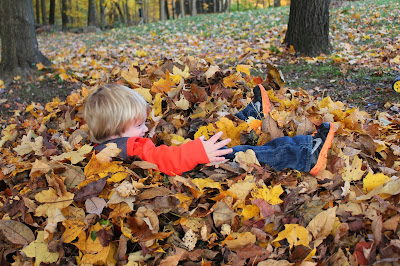 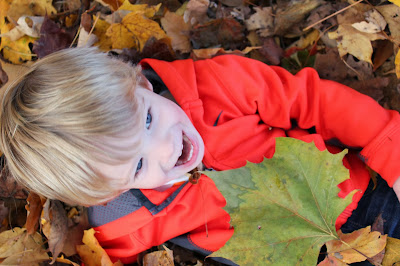 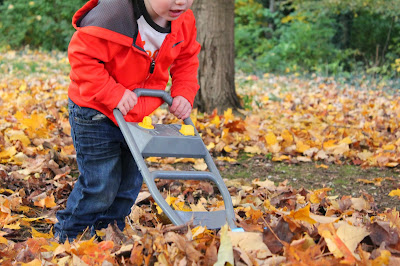 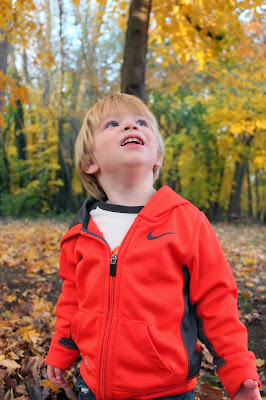 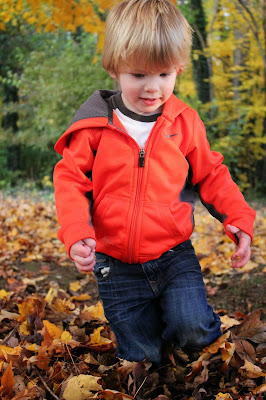 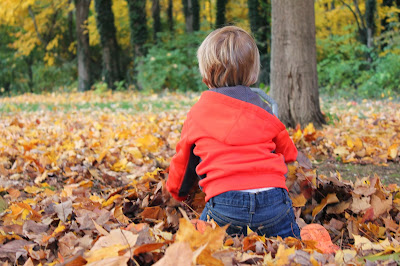 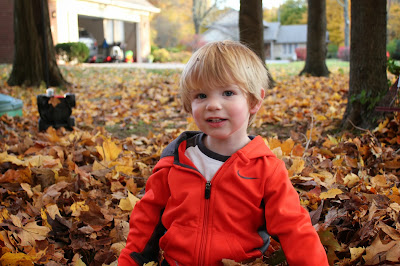