I got an email back in July offering advanced ticket sales for the circus, which was in town this past weekend.  As December grew closer, I began looking forward to taking the boys to the circus and watching their faces light up with each act, more fascinating than the one before.

Saturday morning rolled around and Ryan and I briefly discussed how to tell them about the circus without putting much thought into it. We agreed to simply say that we had a fun surprise for them. Instantly, they were excited. They cooperated through the process of everything that has to be done to just get out of the door and we were on our way by 10am.  During the short drive downtown, Theo asked repeatedly what the surprise was.  “Is it a toy?”  “Is it a Lego?” “Are we going to a store?”  “Are you taking us to the Lego store?”  We answered “no, this is a different kind of surprise – a show.”

When we arrived at the arena, Theo asked what this place was called. I told him and he said “I hate this place.”

They were of course captivated by all the obnoxious toys and other overpriced sundries around every corner. We found our seats and started right off with some very affordable (no, I’m kidding) cotton candy.  I thought this would cheer Theo up and get him in the mood for the show.  Once the show started, it held their attention for moments at a time.  For the most part though, Theo asked every few minutes if it was over, if it was time to go, or if we could go home yet. 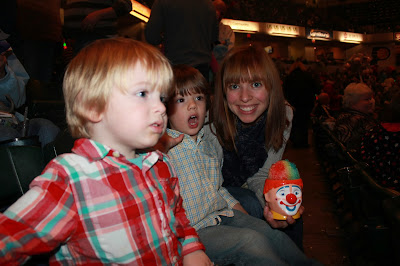 One of very few photos taken at the circ-tastrophe.

I wasn’t the only one that felt that way.  In the car, Theo started whining and complaining about every little thing.  It was only a matter of time before he started directing his mood at Dexter.  I take issue with this because it happens all too often and Dexter is undeserving 95% of the time.  Theo was calling Dexter mean names and Dexter was starting to complain and whine too.

I couldn’t even tell you how many times we asked Theo nicely to stop before he flipped our switches and Ryan and I both SNAPPED.  I yelled at him.  Ryan yelled at him.  He was crying and yelling, Dexter was crying and yelling.  Ryan told him not to say another word the rest of the way home (maybe 5 minutes tops) and he continued to scream “I WANNA TALK!!”  By this point every one of us was upset.

We got the boys inside and eventually to bed for their naps.  I leaned against the counter in the kitchen and cried into my hands.  What a failure.  The circus. This day. This parenting.  It’s far from daily, or even weekly, that I freak out and yell at my kids but when I do, I hate myself for it.  I know it happens. I know it’s pretty normal. I also feel disgusted and guilty about it.  How can I expect them to express themselves appropriately when I am screaming at the top of my lungs in an attempt to get my point across?

As they slept, I started thinking.  My Mother-in-Law texted me to ask how they liked it.  I explained that they (mainly Theo) were not as impressed as we’d hoped.  That he must have thought “surprise” meant something else. A toy. A new Lego.  She said my nephew Spencer was the same way around that age and thought he was getting a Thomas the Train car if someone said “surprise.”  At that moment I realized that some simple thought and explanation could have done two things: 1 – Prepared them for what we were getting ready to do and 2 – Prevented this whole, big, dumb, stupid mess.

I read an article maybe 6-8 weeks ago that has stuck with me.  Someone had posted it on Facebook. The title caught my attention and has remained in my mind ever since then. 10 Things I Learned When I Stopped Yelling At My Kids. Please take a moment and read it if you haven’t already. I can relate to so many of the bullet points that this author shares.

After the circus fiasco, not much time passed before I witnessed a father yelling at his daughter for breaking a glass at our mutual friend’s party.  He didn’t really “flip out,” for lack of a better term, but it was enough to give me that bad, sad feeling in my stomach.  My instant mental reaction was “hey dude, I know that you’re embarrassed that she did that but she’s just a kid, she’s your baby girl – and you sound a little scary right now.”  PAUSE.  Reality punched my face.  Yeah.  If I thought he was a little scary, then what in all hell do my kids think when I unleash my frustration on them in the form of yelling … when no one else is watching?

I can stop yelling.  I know I can.  I don’t yell at them in public. I want strangers to believe that I’m a loving mom. I don’t yell at them in front of my friends.  I want my friends to believe that I’m a loving mom. The boys sure don’t stop pissing me off in public or in front of my friends, so I’ve figured out some coping skill to refrain from showing my poor parenting choice when I have an audience. I want to be that loving mom when it’s super hard and my only audience is my most important audience – my boys.  I don’t scream at adults when they upset me.  Why do I think it’s okay to let my emotions run rampant on my own flesh and blood – precious, tiny little humans that I chose to willingly and lovingly bring into this world?  Puke…I can’t do it anymore.

All else taken into consideration – yelling doesn’t help.  If the kids are yelling, me joining in only escalates the situation.