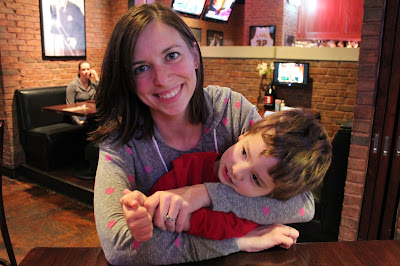 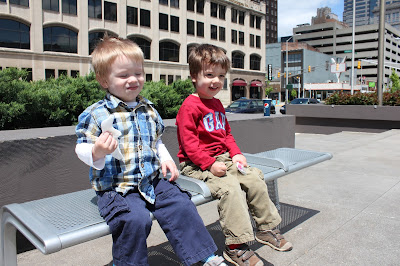 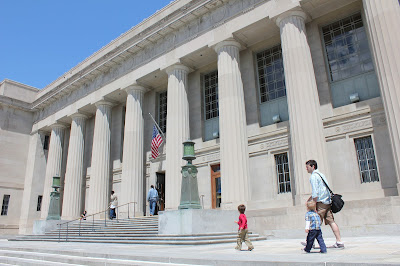 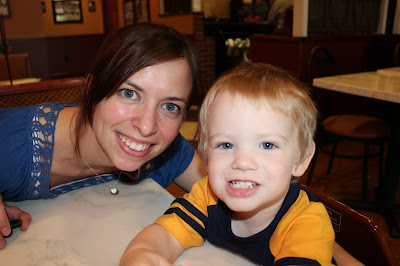 cheating a little – this one was taken Saturday.
Sunday started out with a blank slate – no plans.  “The boys” got me a gift card to my favorite spa for a pedicure and 1 hour Swedish massage.  So looking forward to that pampering!  Theo has been asking to go to Scotty’s for a few weeks now, so I told him to ask daddy if he could take me there for Mother’s Day.  If you’re local, and especially if you’re local and you have kids, you need to go there!  They have a great kids’ menu and kids eat free on Sundays and Tuesdays.  Little did I know that moms received a free dessert as well on Mother’s Day!  All around win.  Food was delicious. The boys cleaned their plates!
Afterwards, we talked about where we could go and what we could do downtown that the boys would enjoy. It was a beautiful day, but a little chilly so the Central Library seemed like a good option. The boys had never been and I had not been there in a long time.  I think we were all awestruck at the enormity of the open space inside.  It is a beautiful, historic building that underwent a huge renovation a few years ago.  Modern function meets classic beauty.  The boys had fun playing on the computers, running from one end of the kids section to the other, and picking over a few million books.  Afterwards, we strolled around outside a little bit and I only snapped a few pics on my phone that I am having trouble transferring to my email/computer. Boo.
We went home and the boys took LONG naps, Ryan cut the grass, and I tore everything out of our bathroom vanity and re-orgainzed like a mad woman. Then cleaned the soap scum out of our shower that had been building for longer than I care to admit.  Doesn’t sound too relaxing, but it’s what I wanted. TIME. Time to do things that go beyond the basic laundry folding and dishwasher unloading.  I need lots more of it, but nothing is so pressing that it can’t wait.  After they got up, we enjoyed a nice dinner and lounged around the rest of the evening.   I couldn’t have asked for a better Mother’s Day!
Oh, the boys were funny.  Dexter kept saying Happy’s Mother Day instead of Happy Mother’s Day.  Then Theo  got confused and kept asking “can you tell me the words again?”  I love those two little crazies.  And their dad is a-okay too.
xo,
~C~

prepare to be green with envy, y’all.

Here’s what a typical (week)day in the life looks like.

6:15AM:  The alarm goes off.  Sometimes Dexter is already awake, sometimes I’m stunned by the silence and actually waking up to the sound of the alarm clock.  Suppose on this day, Dexter was still asleep.

Nah, scratch that.  He’s awake by now.  Starting over.

5:32AM:  Wake up to whining and temporarily wonder if I am on another planet or if it’s the middle of the night.  Disoriented, I walk out to the kitchen with my eyes as squinted as they can be and still be useful for seeing things. Sort of.  I listen to Dexter through the monitor in the living room either calling “mama” or “I want milk hot.”  Yep. We still give him warm milk. Shut up.

5:35AM: Dexter is tucked snugly in our bed between us and slurping down the last few sips of milk before handing me his cup and saying “Here. Here. Take it mommy. All gone.”  We all fall asleep.

6:30AM: I roll out of bed and head to the shower.  Sometime while I’m in there, Theo wakes up and Ryan has started getting him and/or Dexter dressed.

7:20AM:  This is the goal time to leave the house.  At this point, we’re usually still putting on shoes and jackets and it just depends how cooperative two little boys are as to whether or not we’re out the door by 7:40.  If it becomes clear that it’s not happening, I just leave and Ryan takes them because while my job is flexible, I feel the need to be there at a certain time. Ryan flies by the seat of his pants.

7:30AM: If I drop off the boys, this is the desired time.  I get them out of their carseats and follow them up the sidewalk, walk in, put their jackets, diaper bag, shoes, etc. in the closet and kiss them goodbye.

4:20PM: Pick up the boys.  Chase Dexter around the babysitter’s house for 10 minutes begging him to let me put his shoes on because he is doing anything he can to stall leaving.  Look, kid.  I’m glad you like it there and all but I’m sure your sitter is ready for you to get the H-E-double hockey sticks out of there and frankly, I just wanna go home myself.

4:40PM: Usually around the time we get home.  I’ll flip on a cartoon for the boys to watch because that’s what guarantees me the least interruptions while attempting to create some kind of Pinterest culinary masterpiece.  Check on them periodically to make sure no one’s bleeding, they haven’t knocked the t.v. over, or just taken off down the street for a stroll.  Okay -NONE of these things have just happened so back off.  Obviously because I’m checking on them periodically.

5:30-5:45PMish: Ryan gets home from work and dinner’s ready.  (MUST BE NICE).  We eat. This can be a drawn out process, guys.  By the time dinner’s cleaned up it could be 6:30 or 7.  There is a lot of redirecting to eat. Bribery. False promises.  True promises.  Encouragement. And surrender.  I’m just kidding. It’s not that bad. They’re pretty good eaters usually, just slow.

7PM: Bath night is every other night until they are getting sweaty and slathered with sunscreen every day.  So if it’s bath night, we’ll do that. I’ll let them stay in there as long as they like unless they’re splashing all the water out and acting too nutso for me to handle.  They’re usually out by 7:30 and ready to play some games, read some books, or play with toys.

7:50PM: 10 minute warning! It’s almost bedtime. Time to brush your teeth. Time to get your fresh diapers on.  So you (Theo) can fill it up with a big bomb since you won’t do that in the toilet (again). Time to pick out what toy(s) you want to take to bed.

9:46PM: I wake up in Theo’s bed and temporarily wonder if I am on another planet or if it’s the middle of the night.  Disoriented, I walk out to the living room with my eyes as squinted as they can be and still be useful for seeing things. Ryan’s still awake and asks me where I’ve been. As if.

10:31PM: I’m falling asleep on the couch again and announce that I’m going to bed.  Or maybe I’ve got the laptop right here, and I’m pecking away at the keys. Trying to document the things that my boys do. The things they say. Things I want to remember and things I’d rather forget.  Or maybe I’m watching Nashville or some other show on DVR.  Maybe I’m watching Ryan play a video game while I play on my phone.

At some point, I do go to bed and look at Pinterest for far too long. Until I cannot keep my eyes open and my phone slips out of my hand.  Then I do it all over again.

Linking up with Melissa at Growing Up Geeky for Toddle Along Tuesday.

I’m participating in Toddle Along Tuesday with Melissa at Growing Up Geeky and this week’s topic is Mommy’s Pet Peeves.

Let me just say that I try to maintain a positive attitude overall, but sometimes it’s just fun necessary to vent!  Here are some of my pet peeves:

1. I know I’m not a princess and my children are not royalty or anything, but for the love of Pete, hold the freakin’ door open when you see a lady with an 188′ long double stroller coming through. No excuses.

2. I’ve never denied that Dexter was a “surprise” to us but for crying out loud, don’t ask a lady you barely know if her second pregnancy (or any pregnancy) was planned.  Geez.

3. You know how annoying it is when people park 3″ from you and you have to shimmy into the car sideways to avoid slamming your door into their car?  Only because you don’t want to mess up your own car?  Well, there’s a whole new level of annoying to this when you have to put a toddler in a carseat.  Come ON!

4. How about every time you say something about your child to someone and they have to one-up you?  They feel the need to tell you something that their kid did that was bigger and better than your kid’s thing.  Every.Single.Time.  Guess what?  It’s not necessary.

5. People that have to have every most expensive brand/thing for their kid.  Just because it’s expensive.  Because it sure isn’t always cute.  Can’t use hand-me-downs because that’s for poor people. Go ahead and call me poor, pal, that’s one less thing I have to buy.

6. Rude strangers in public that ignore my {obviously adorable, sweet} children when they wave or say “hi.”  As crazy as it makes me sound, I am always offended by this and am paranoid it will hurt the boys’ feelings.

What annoys you the most?
~C~