I should have known that it was just too good to be true when Dexter immediately started sleeping 4-5 hours at a time at night when we came home from the hospital.  He kept it up for about 3 and a half weeks but for the last 10 days or so, he has decided to try an alternate schedule.
That schedule involves waking up at precisely 2am, 4am, and 6am to eat.  And that’s after I’ve gone to bed at 11 or midnight. And sometimes it’s 45 minutes or an hour from the time we wake up until I get back to sleep.  And there’s no back to sleep after the 6am wake up because Theo has decided that 6:20 is precisely the perfect time to start his day. So maybe I’m getting 5 hours of sleep a night, and I guess that’s not too terrible. But … oh. What I would give to get those 5 hours of sleep in an uninterrupted way.
There were about 5 nights that were pure misery.  Not only was he waking up, he was fussy and refusing to go back to sleep. So that means I’m doing a cardio workout of bouncing, swinging, swaying, and patting to try to keep him quiet so he doesn’t wake Theo. Egads. That’s when the tears start falling. (Mine).   Sheer exhaustion, I tell you. Knock on wood, he’s been going right back to sleep the last couple of nights.
Hopefully we’ll get into a good routine in the next several weeks and everyone will be sleeping through the night.
Good thing he’s so cute during the daytime,
~C~ 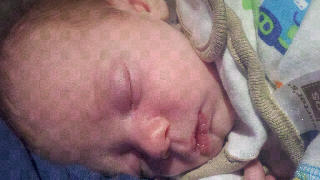