I’ve been surprised so far at how the boys have done with the transition from our previous sitter to the new one. I thought Theo would be the one throwing fits, resisting, and expressing himself through negative behaviors.  Instead, it’s Dexter who seems to be struggling most with the change.

I thought Dexter would be fine because he’s so easy. He’s so happy, easy to please, and easy-going.  He has a smile plastered on his face 90% of the time and rarely throws fits or tantrums.

Dropoff:  We went together to support each other, the kids, and because we both wanted to see their reactions firsthand.  The room we take them to in the morning has a baby gate and Dexter kept trying to escape and run towards us but he wasn’t crying. We hugged and kissed both boys and told them goodbye.  As we left, Dexter was trying to get out of the baby gate and Theo was standing in the middle of the room crying and calling out to us.

I remembered 10 minutes later that I’d forgotten to leave the diapers and wipes so I texted and asked if I should come back or if that would make it worse. She said within five minutes they were both playing and happy and that it could wait until afternoon.  Ryan wanted to join me again for pick-up so we went together and as we opened the door, I heard Dexter’s cry.  She said that he saw us out the window and burst into tears.  I can only assume that he was feeling stressed and the relief of seeing us out the window triggered that emotional release.  He latched onto Ryan and continued to cry.  She said they had a great day and that they seemed to be transitioning well considering their ages.

That night, the boys played and were active at home.  When bedtime rolled around, their behaviors escalated and they both became very whiny and emotional.  This isn’t totally out of the ordinary for them, especially Theo, when he is very tired.  The odd thing was how Dexter screamed bloody murder like he had a broken leg when he was put in his bed.  Pretty sad situation.  He stopped after a few minutes and there was nothing but dead silence coming from the monitor.

I dropped them off and Theo ran over to the toy box immediately and started digging for something.  When I said “bye, Theo!” he yelled “bye, Mom!” without ever looking up.  Dexter, on the other hand, hugged me and did not want me to put him down. The sitter was able to engage and distract him and he went right to her to go look for cars to play with.  Better.

At pick-up, she said that Dexter had a few crying spells in the morning and was looking for me.  I picked him up and hugged him and said “were you crying?”  He answered, “yes, I was crying for youuuuuu!”  Oh, no.  Sad, sad, sad.  She said again that she thought they were doing very well adjusting and complimented us on how clearly the boys speak and how smart they are! Nice to hear.

Bedtime was better for Theo but about the same for Dexter. Lots of crying and screaming and begging to be held.  Ugh.

Ryan volunteered to drop them off.  It was Red, White, and Blue day in celebration of the 4th tomorrow, so we dressed them to the nines! 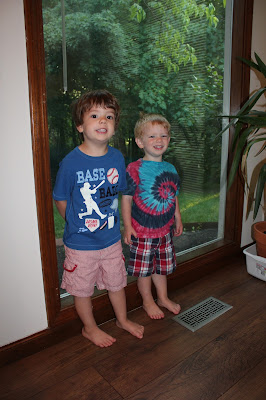 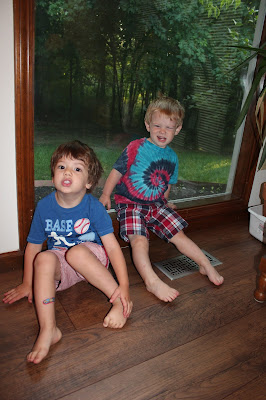 Getting a decent picture of these two is quite the task these days.  Not that it’s ever been easy…maybe when they’re 8&9?? 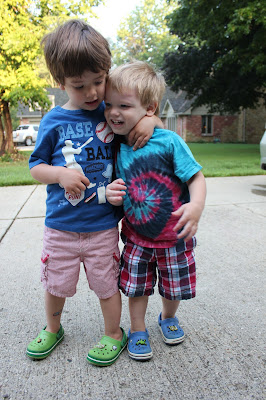 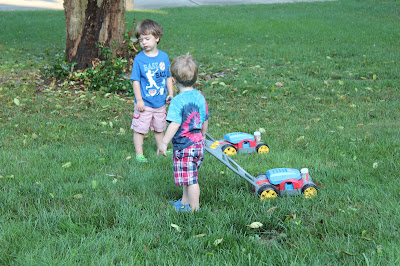 We had a little extra time this morning so why not spend it tackling some yardwork? 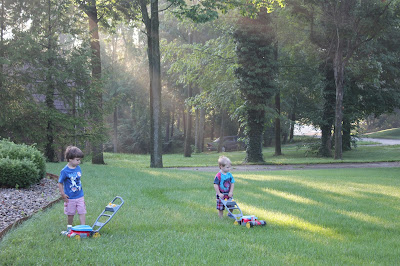 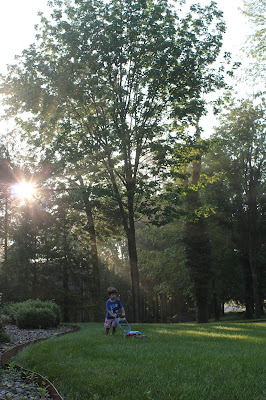 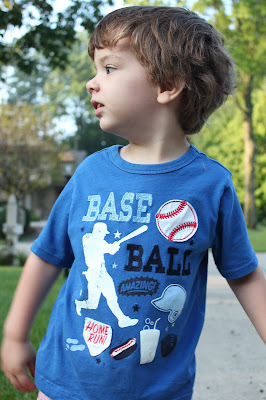 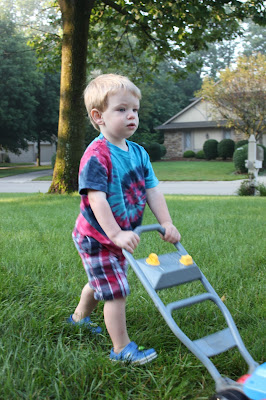 Ryan called after drop off and said that it did not go so swell.  He said that Dexter cried when they went inside and started calling “Mama! Mama!”  He voluntarily went from Ryan to the new sitter, but then switched to crying for daddy.  Double UGH.  As he left, Dexter was still crying.  Again, Theo was fine.

I know they are safe and I know they will be okay.  I don’t know exactly how Theo is processing this because he seems … FINE.  And maybe he really is fine.  I just did not expect Dexter to be so emotional or have such a hard time.  I hope that it gets a whole lot easier before Theo starts going to school three days a week in August. A month is a long time in the life of a 2 year old so I’m hopeful that by then, Dexter will be well-adjusted and we won’t be having these meltdowns every day.  Poor guy. I wish I could make it easier on him (and us!).  I sure am glad that their first week was only 3 days.

Have you ever dealt with a transition like this?  What helped?