I know I just posted my August update but it was late and I’m trying to get ahead of the game here, since I actually have a game plan for once.  Waaay back at the beginning of January, I said I was going to make my health a priority this year.  I wanted to do it for myself and for my family.  I wanted to feel better, be better, do better, and be an example to my kids.  I wanted to have the energy I needed to keep up with them and play with them for as long as they wanted me to.  All that being said, I had the goal of our vacation in mind.  I knew I had 9 months to lose enough weight to feel comfortable in shorts and to build up to having the energy needed for successfully surviving the theme parks.

I have maintained the weight loss thus far.  However, I’ve been tired these last couple of weeks.  I’ve noticed that the metabolism tanks and the exhaustion creeps in way faster than the pounds come back.  But I know that the pounds are not far behind once I start slacking in other areas. There are a lot of excuses for not exercising much this summer, but none of them can justify my laziness, which is what it boils down to.  I say I don’t have time, but I made time before when it was top priority.  I have as much time now as I did 6 months ago.  The only difference is that I’m now at a comfortable weight so I don’t feel the same urgency and drive that I did before.

I’m ready to get back to it, for real.  I ran outside yesterday with a goal of running a 1.6 mile loop in 17 minutes.  Well, I made it 15 minutes (not sure of the distance) and thought I was going to die.  I mean, DIE. First run in about two months and I chose 3:30pm and 86 degrees – maybe not my best choice for getting back into the groove. I’m not sure of the distance, but maybe 1.2 miles.  Determined to do better, I went to the gym today and guess what?  AGAIN.  I thought I was going to die at 15 minutes.  But I didn’t.  I pushed myself to make it another minute. Then another quarter mile. Then til the end of this song. Over and over until I made it 3.1 miles – a whole 5k! On a treadmill, I know, but I did it.  And only for the second time in my life.  I’m ready to get back to it.  Nothing like that sense of accomplishment for doing something you didn’t believe you could do. We’ve got about four weeks until our vacation and my goal is 12 runs in 4 weeks.  2 down, 10 to go. I’ll let you know how it goes.

Since it’s been a long time, here are some then and now shots.  In the same clothes. 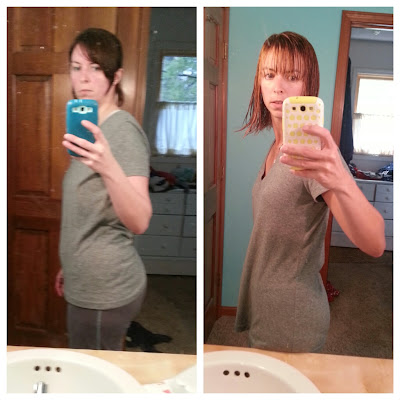 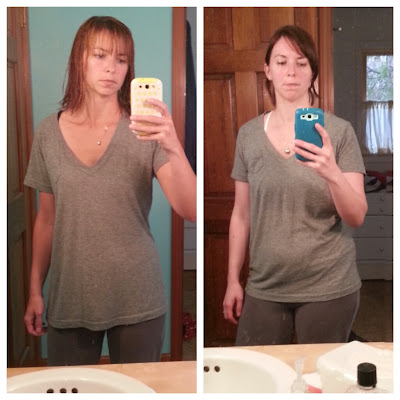