In lieu of annoying you with one thing I’m thankful for every day for a month, I really tried hard to think of one thing that I am most thankful for.  It’s impossible.  Every time I try to think of something, it just seems so obvious and cliche.  So I tried to think of what I have that would be devastating to lose…that’s also pretty much everything.  Not things like hot mocha choca vanilla soy grande lattes – those I could live without.

Food on my table.  What would it be like if I had to worry about where my kids’ next meal would come from?

A roof over my head.  What would it be like if I had to worry about where we were going to sleep tonight?

My husband.  A partner in this crazy life. What would life be like without this man to hug and co-parent with and confide in at the end of every day?

My family and in-laws. What in the world would life be like if our family gatherings were full of drama and tension?  I’ve been so fortunate with my family of origin as well as the one I was lucky enough to marry into.

My job.  I know all too well what it was like to have to leave to go to work on Thanksgiving.  Sad!  I am happy to have a job that not only do I enjoy, but one where I feel appreciated.  My agency is generous enough to pay me to spend time with my wonderful family.  Aside from that, I’m lucky that we don’t have to worry if we have enough money to take our kids to the doctor. Or if we have to decide between that and buying groceries. Or paying the light bill.  In this day and age, I’m just thankful for my job.  Everything else is icing on the cake.

I’m just thankful. No one’s life is perfect, but when I think about how much worse it could be, I’m thankful. I forgot to mention, my health. The health of my family members.  I have no idea what it would be like if myself or one of my kids were fighting a life-threatening or disabling illness.  Thankful.

My little turkeys had fun decorating cupcakes with Nana, Spencer, and Aunt Chelle. 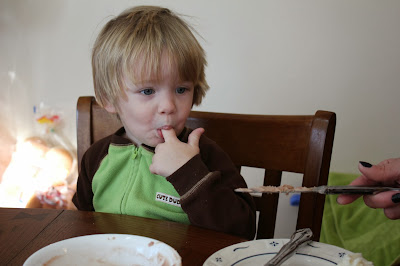 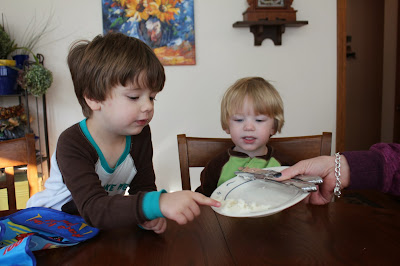 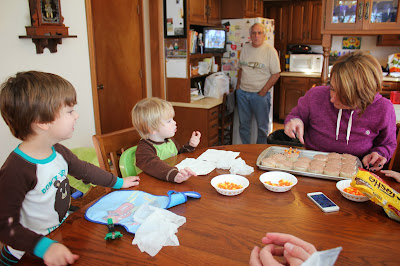 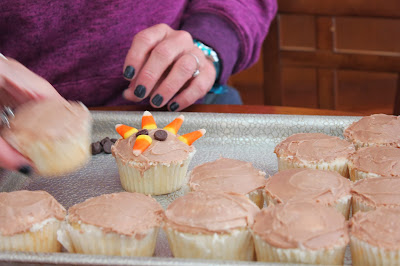 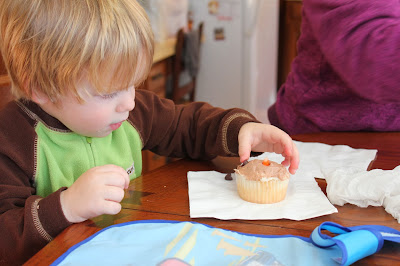 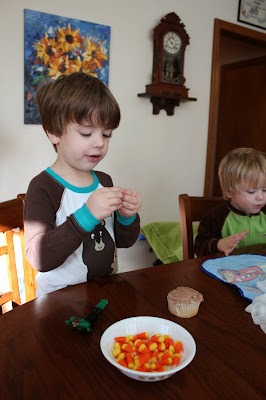 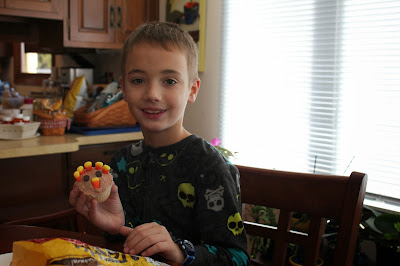 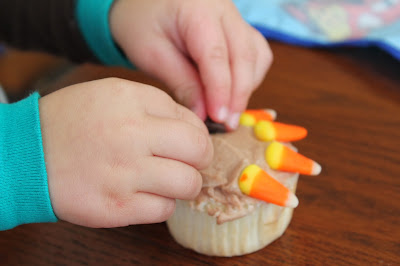 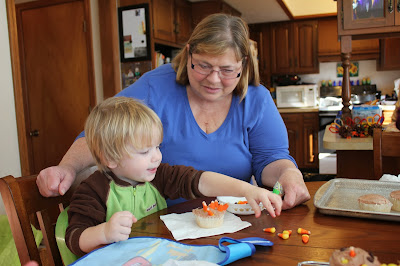 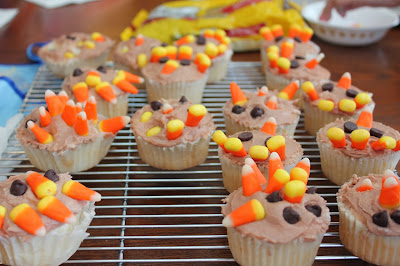 hope your weekend was great,
~C~

Before vacation, I committed to 12 runs in four weeks and did fairly well.  I made the mistake of saving that 12th until the day before we left and there was just too much to do.  Still, I was proud for sticking to my plan to get back on track with running and exercising.  Since we’ve been home from vacation, I’ve gotten lazy.  For one, it’s cold, not to mention completely dark, by 5:30pm.  At that point, I just don’t even want to leave the house, let alone run around when I can see my own breath.

I’ve slacked off.  I’m all but a stranger on MyFitnessPal these days.  My original goal was to lose 20-24 pounds and remain within that range thereafter.  I made it!  It’s been about 5 months since I met that goal and for the most part, I’ve done really well maintaining. I went beyond my goal and I think my greatest loss was around 28 pounds, but that was kind of a fluke as I never stayed there for more than a day or two.  Usually, I’m around a 26 pound weight loss.  Since vacation ended, it’s probably safe to say I’m maintaining a 23-24 pound weight loss.  Still within my goal, but I’ve definitely loosened up on calorie watching, portion control, and exercise.

I haven’t thrown caution to the wind, and I’m still aware of what’s going on, especially on the days when my jeans fit a little tighter.  Just slowing down on exercise makes a difference there, regardless of my weight.  I definitely feel softer and squishier when I’m not running on a regular basis.

A few weeks ago, a friend of mine at work approached me about doing The Ugly Sweater Run.  I hadn’t heard of it before, have you? If you click the link to that website, you’ll see that it’s about as festive as a run could possibly be during the holiday season!  Sounded like lots of fun and I figured signing up would kick start me into running again so I said “why not?”  I only ran once per week between the time I signed up and race day, but I was still happy overall.

The week before the race, the forecast predicted clear skies and 32 degrees. Yikes – cold.  Too bad it was 13 degrees when I woke up this morning!!  It was 24 degrees when the race started and 25 when it ended.

How does one plan to dress for a race in 24 degrees?  Well, naturally I sought out an ugly sweater. 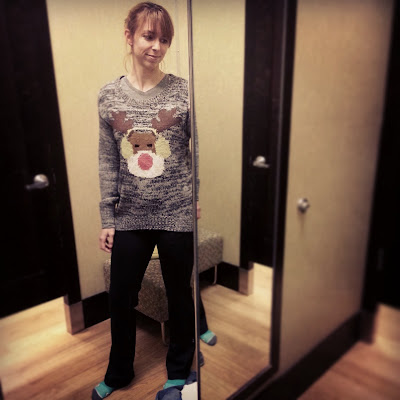 IG caption: Ugly enough for the #uglysweater race ?
I posted this photo on Instagram and got some mixed reviews.  Most thought it was too cute for an ugly sweater race, but my sister and best friend both thought it was pretty gross.  I bought it in hopes of finding something else.  I ended up not wearing it because I figured that $25 was better off in my wallet than spent on something that would potentially make me look like an idiot. So I’ll be taking this back to Kohl’s. 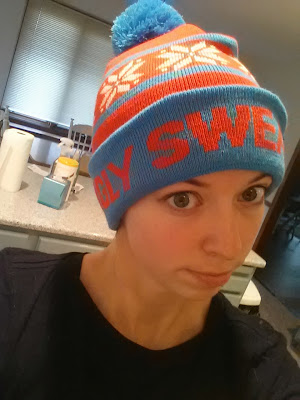 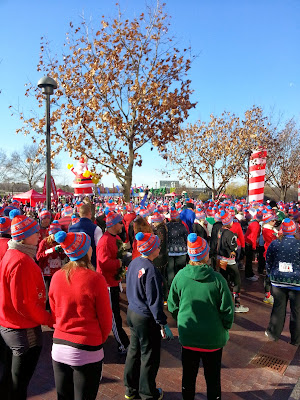 Look at that sea of hats!  The people watching was fantastic. Sooo many people were all decked out.  If (when) I do this again, I’ll be more prepared.  More festive. 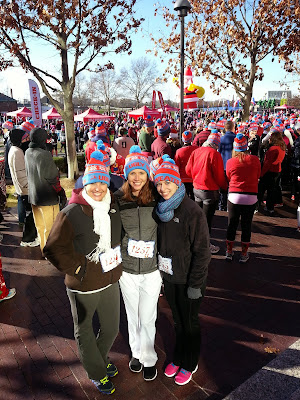 Before the race – we were jogging in place to try to keep warm so I should probably add that to my total distance ran, right?  These are two lovely ladies I enjoy working with.
I ran the first mile, then walked maybe half a mile.  Ran another half or three quarters before stopping to walk again.  I was happy with this because when I ran in 40 degrees on Friday, I only made it 7 minutes before walking 5 and then running another 10.  During the race I ran intermittently, stopping to take short walking breaks about 4-5 times.  I lost track, but I knew starting out that this was not going to be a race I ran from start to finish because of 1. the temperature outside and 2. the layers made it a little more difficult to move.  I was just happy to run the first mile.  Thinking back now, I don’t even know why I stopped. I don’t remember feeling out of breath or any pain. I must have just seen that first marker and made it my goal to make it that far.  I probably could have done more. Rats… 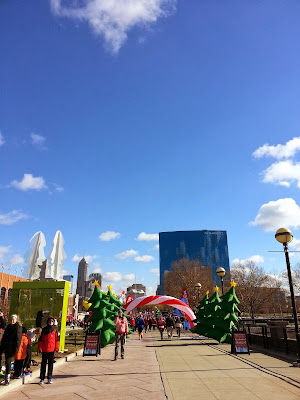 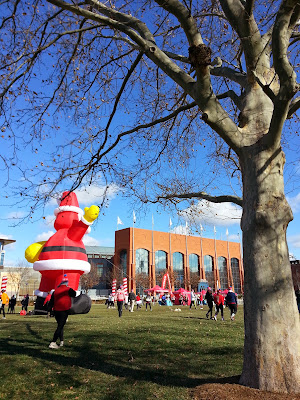 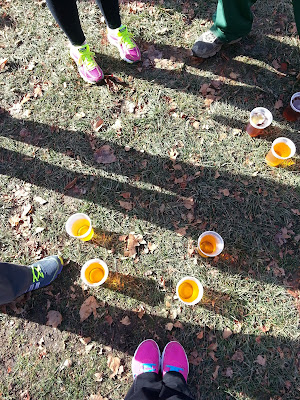 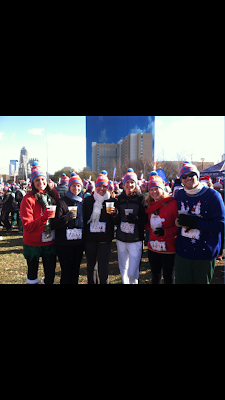 After the race – we picked up some pals along the way. 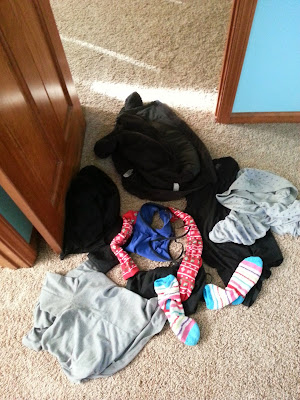 And finally – what does one wear to a race when it’s 24 degrees outside?  (Not pictured – gloves, scarf, and sweater hat).  North Face fleece.  Thermal moisture wicking long-sleeved shirt.  Cotton long sleeved shirt.  Sports bra. Tank top.  Knee socks (CHRISTMAS!). Fleece socks.  Long john thermal underwear.  Yoga/running pants. Truthfully, it was kind of okay. I was warm enough with excitement before the race.  During the race, I had to take my scarf off and unzip my jacket. My back and arms were sweating.  After the race, my hands and feet were freezing but the rest of my body was okay. I was super thankful for the sunshine and no wind!
I’m excited to have done the race and looking forward to participating in one that I can actually run, start to finish!
xo,
~C~

Last Friday, Ryan and I spent a half day volunteering at a local food bank.  The organization, Gleaners, is well known to the community as a provider of food to the hungry.

At Gleaners Food Bank of Indiana, we solicit, store and distribute food and critical grocery products to qualifying agencies who serve the public directly. Among those agencies are food pantries—as well as soup kitchens, halfway homes and emergency shelters.The food bank is the storehouse for millions of pounds of food and other products that go out to the community. The pantry functions as the arms that reach out to that community directly. Food banks and food pantries—they are not the same. But they share the same commitment. At Gleaners, we are proud of our partnership with food pantries—and many other organizations—who act with us on the belief that nobody should ever go to bed hungry.

Our financial advisor invited us to join Ameriprise agents and customers across the country in a National Day of Service; we were happy to oblige.  I challenge you to watch this video and NOT feel compelled to do something to help.

I never took into consideration how much food we waste at my house until I participated in assembling Backsacks for hungry kids.  As a team of volunteers, we prepared over 4,200 bags containing 14 items.  Every Friday, Gleaners distributes 10,000 bags to needy children in Indiana to keep them from going hungry while away from school for the weekend.  Sadly, the items in the bag might be all that some children get to eat.  I’m fairly certain we waste that much food – or more – every weekend.

Here are the items we placed in each bag: 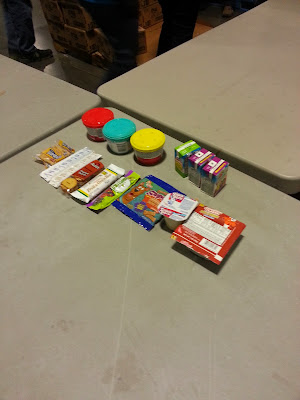 Back row: 3 microwavable pasta meals & 3 juice boxes
Front row: graham crackers, pb&j, pb crackers, fruit&grain bar, fruit snack, cookies, pudding, & cereal
The sheer size and capability of the facility was mind-blowing. Gleaners runs a massive operation with just 70 paid employees.  They rely solely on volunteers to assemble the Backsacks.  It was an honor to be just a small part of that mission and left me longing for a bigger role in serving my community.  Just having enough is something we take for granted EVERY DAY.
Our volunteer group: 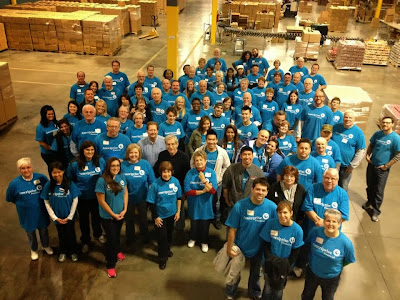 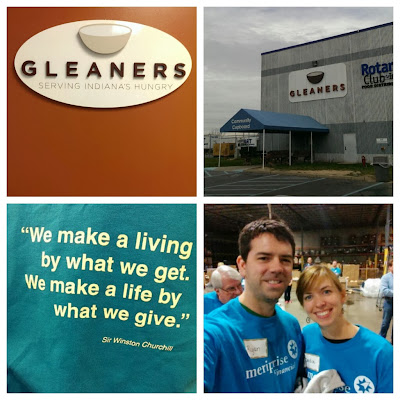 This Thanksgiving season, I urge you to do something – anything – to give back.  If you only have ENOUGH, you have so much more than millions of hungry children in your own country.  More than many families in your state, your town. Your community. In a day and time where we are so wrapped up with living in excess, we all have something we can give. Time. Money. Food.  Can you help?
xo,
~C~