This year, Valentine’s Day held a little something extra for us. Theo’s first school Valentine’s party.  After trudging through the the Pinterest-induced self-doubt and feelings of inadequacy, I marched right into Target around February 12th and bought Theo those Star Wars Legos cards for $2 that I knew deep down he really wanted.  His party was on the 13th and everything so try not to give me any more credit than I deserve here.

He was pretty excited about them. The night before his party, we went through the list of every child in his class and he chose which card and sticker to give to each person. He helped sign his name on every card and he really got into it. It was adorable stuff like “well, Brady likes green so I think he would want Yoda.” 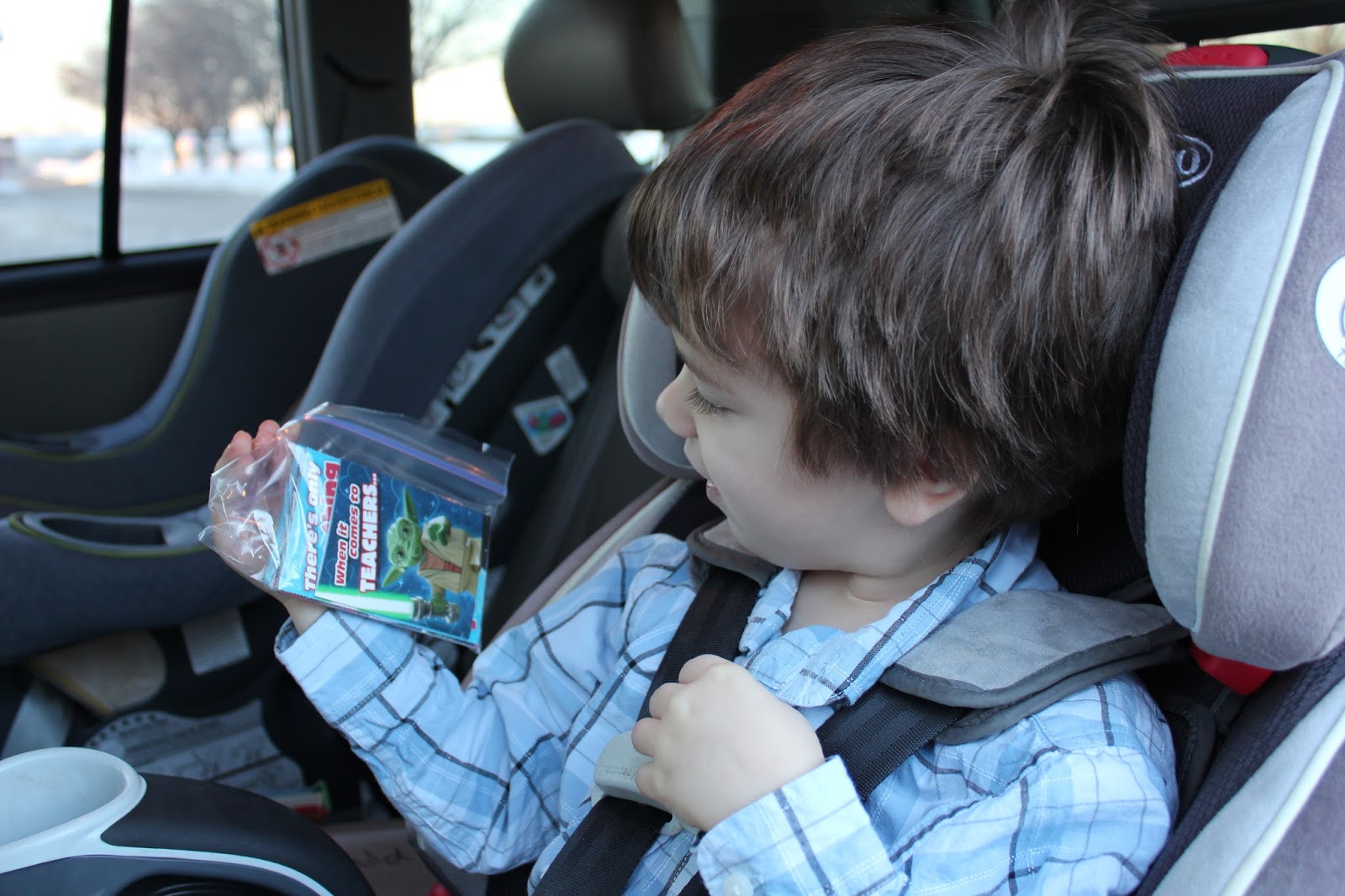 When I picked up Theo from school, he was itching to show me all of his goodies. I held him off until we got home. Boy was on sugar overload for sure. 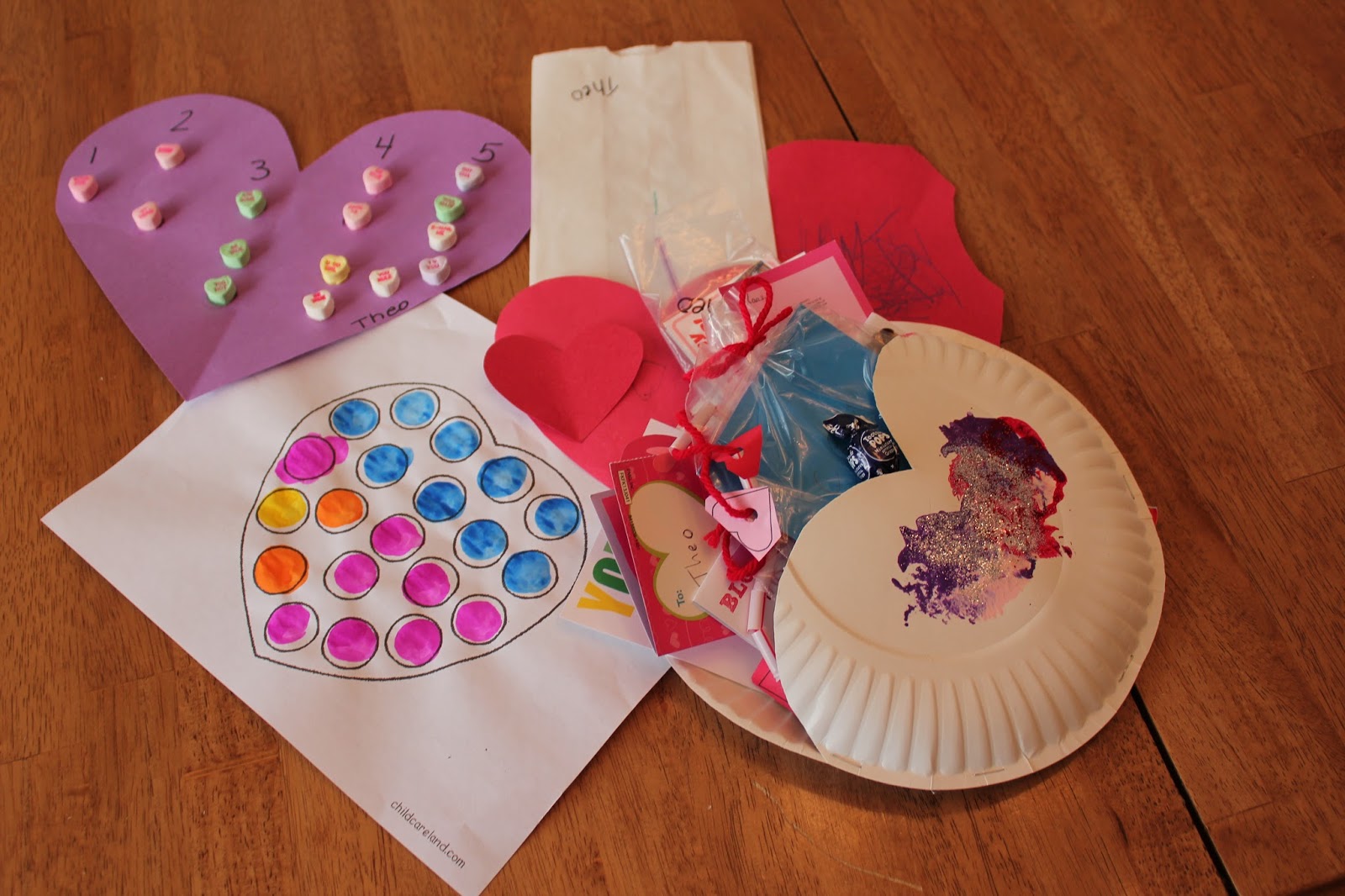 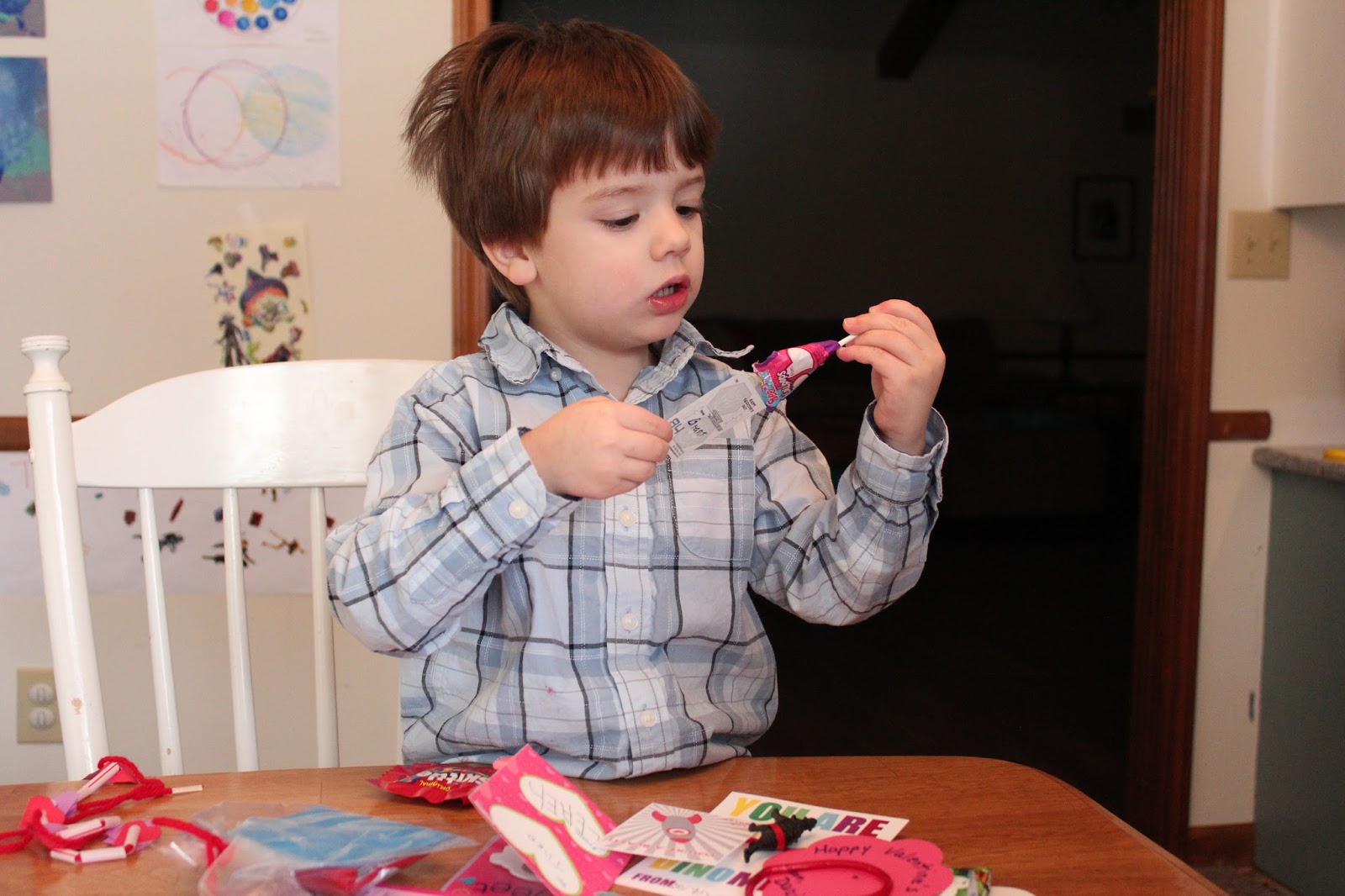 Since Ryan’s parents had agreed to keep the boys all weekend, I knew we had to celebrate with them on Valentine’s Eve. We had a quick and simple dinner followed by chocolate brownies with strawberry icing. 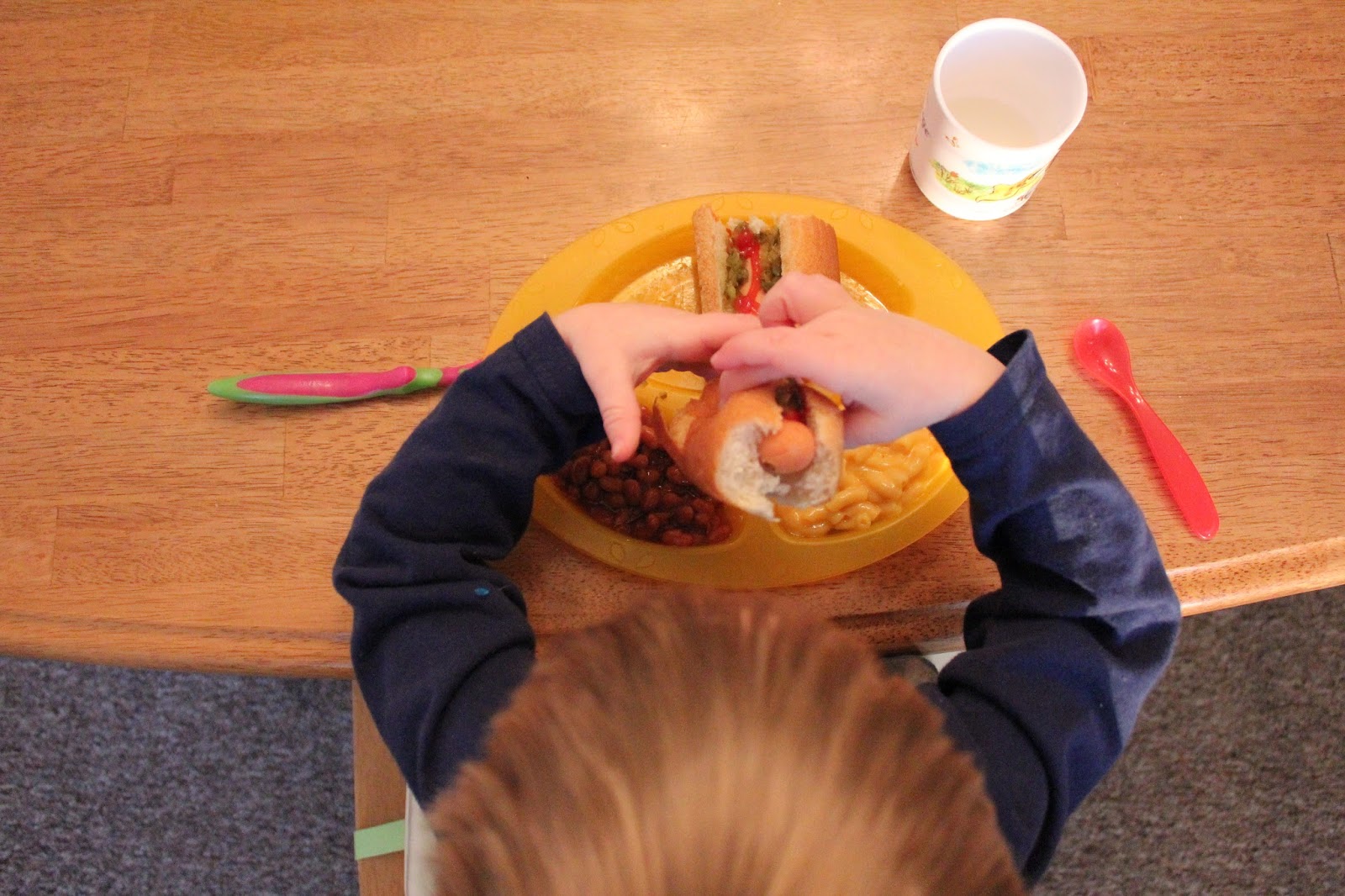 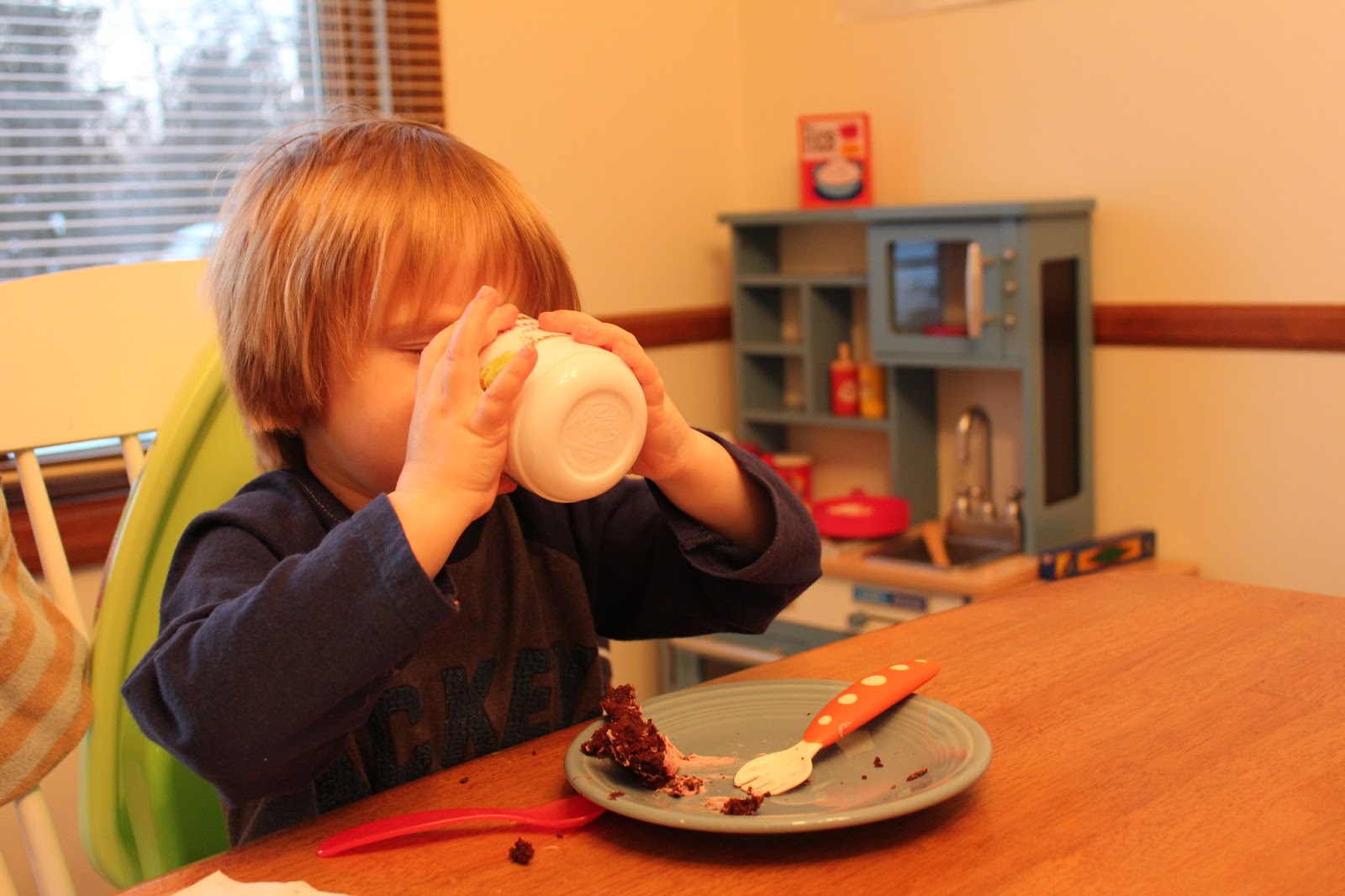 Finally, after dinner, we gave them little baskets that I’d quickly thrown together earlier in the day. For being in such a hurry, they were actually pretty cute and a big hit with the boys. A reminder that it doesn’t take much to make them happy. A heart-shaped bead necklace, some Cheetos, a few Legos, and a couple pieces of candy and they were ecstatic. 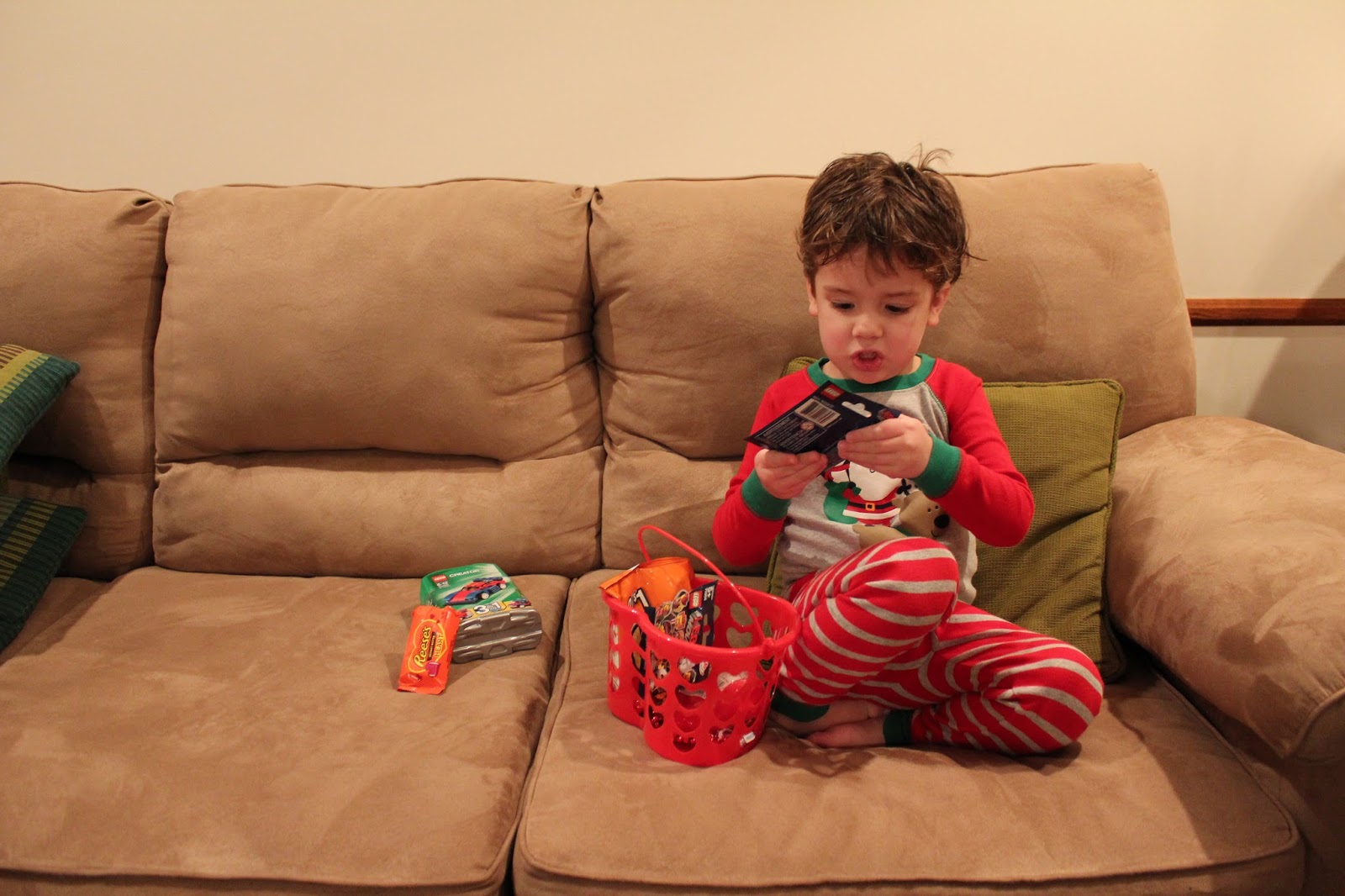 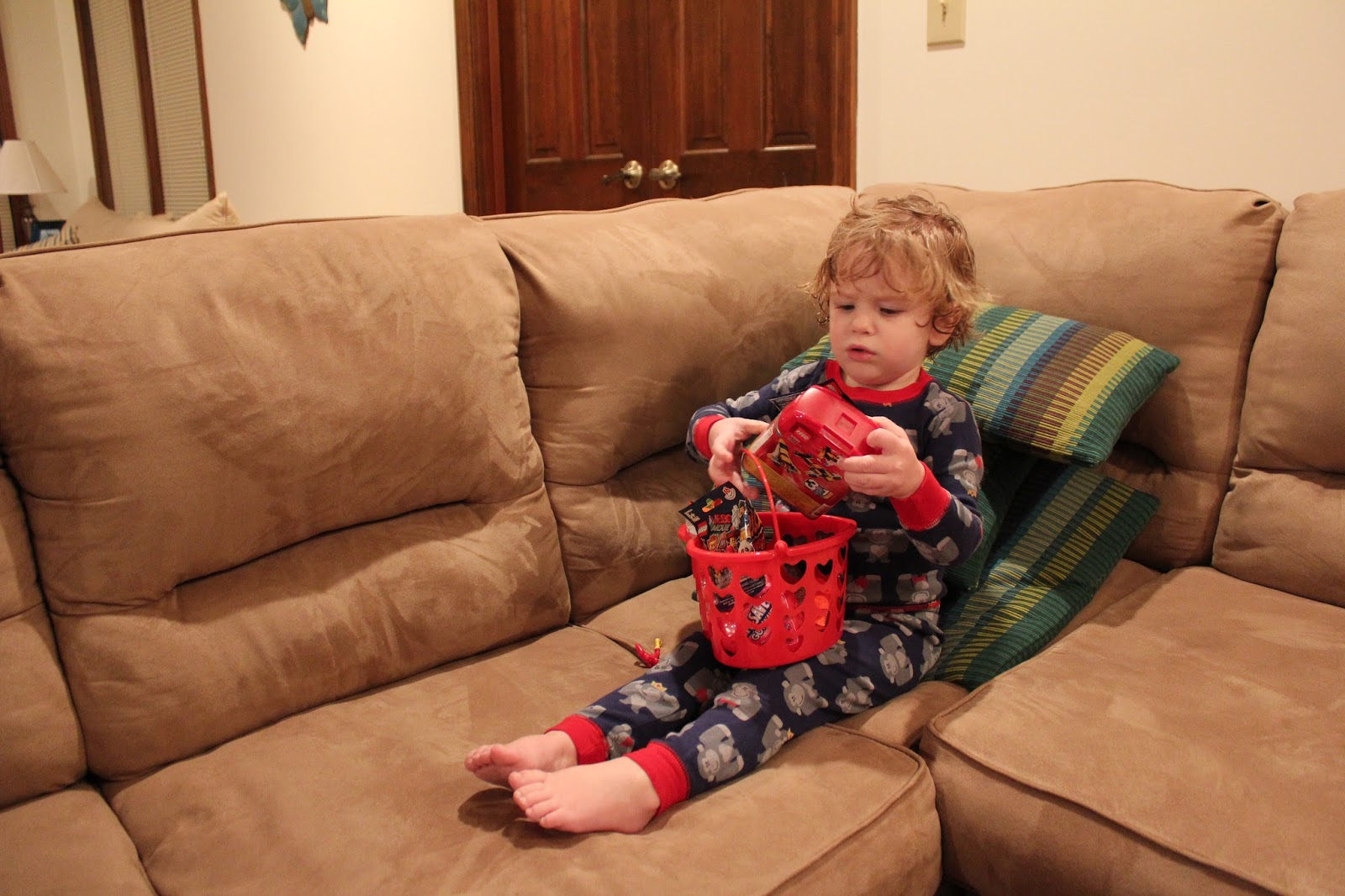 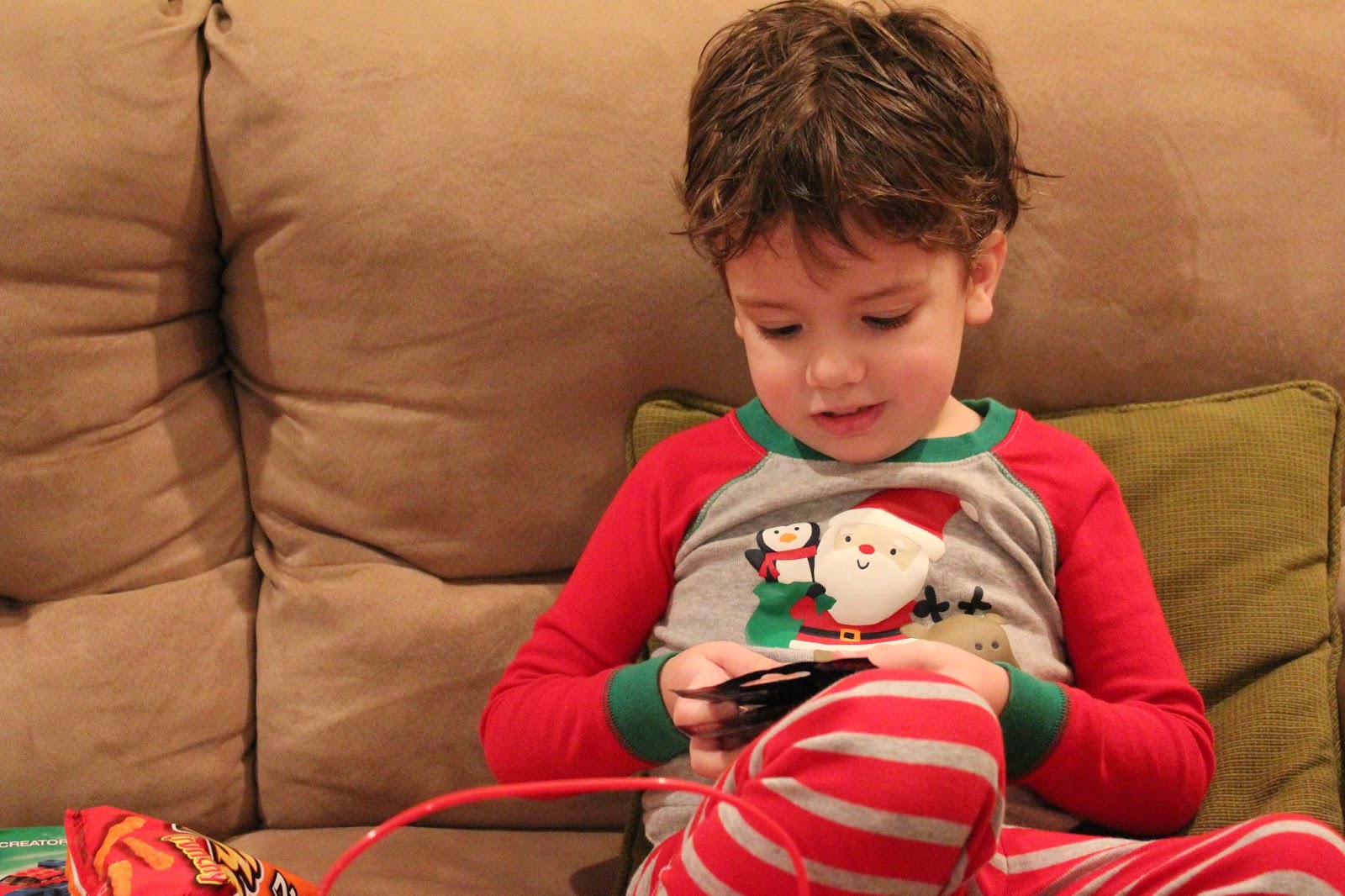 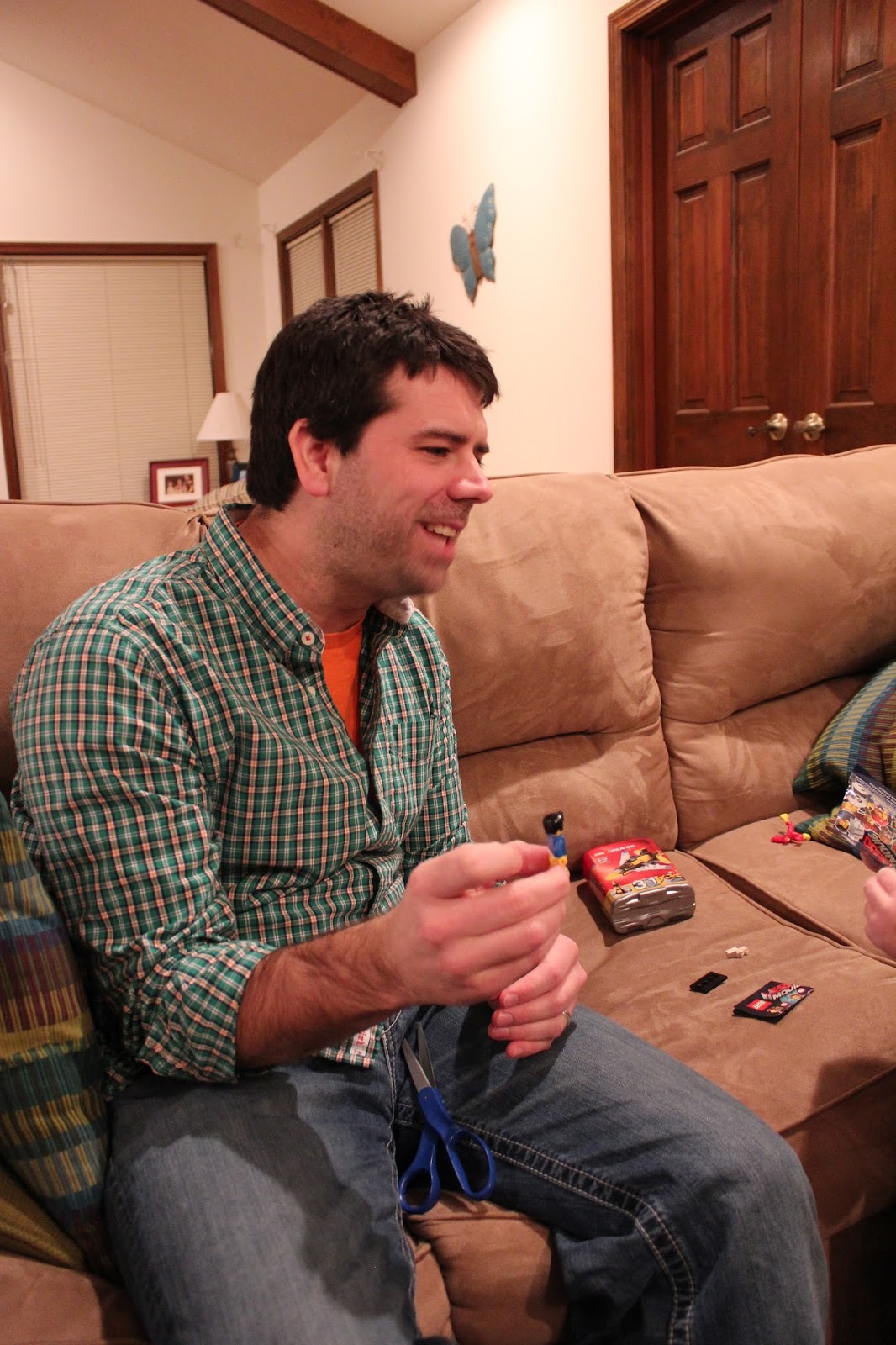 On Valentine’s Day, we got a LOT of snow. Ryan’s parents braved it to come pick up the boys and drive them back to their house for the weekend so that we could carry on with our plans.
Plans were slightly delayed due to having to dig our car out of the driveway when we got stuck! 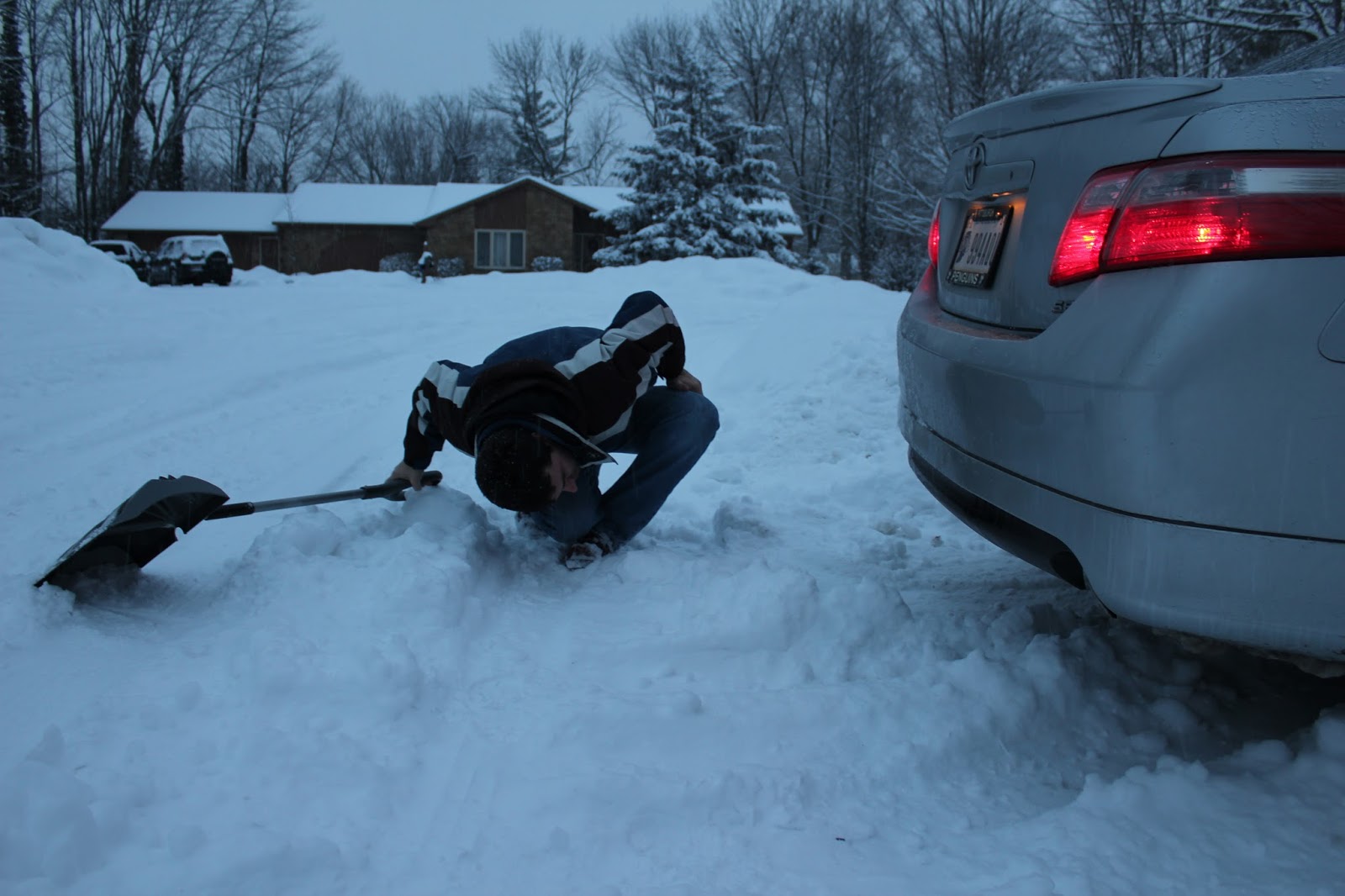 We had a dinner double date with friends and then went to see Labor Day at the theater (we loved it!). 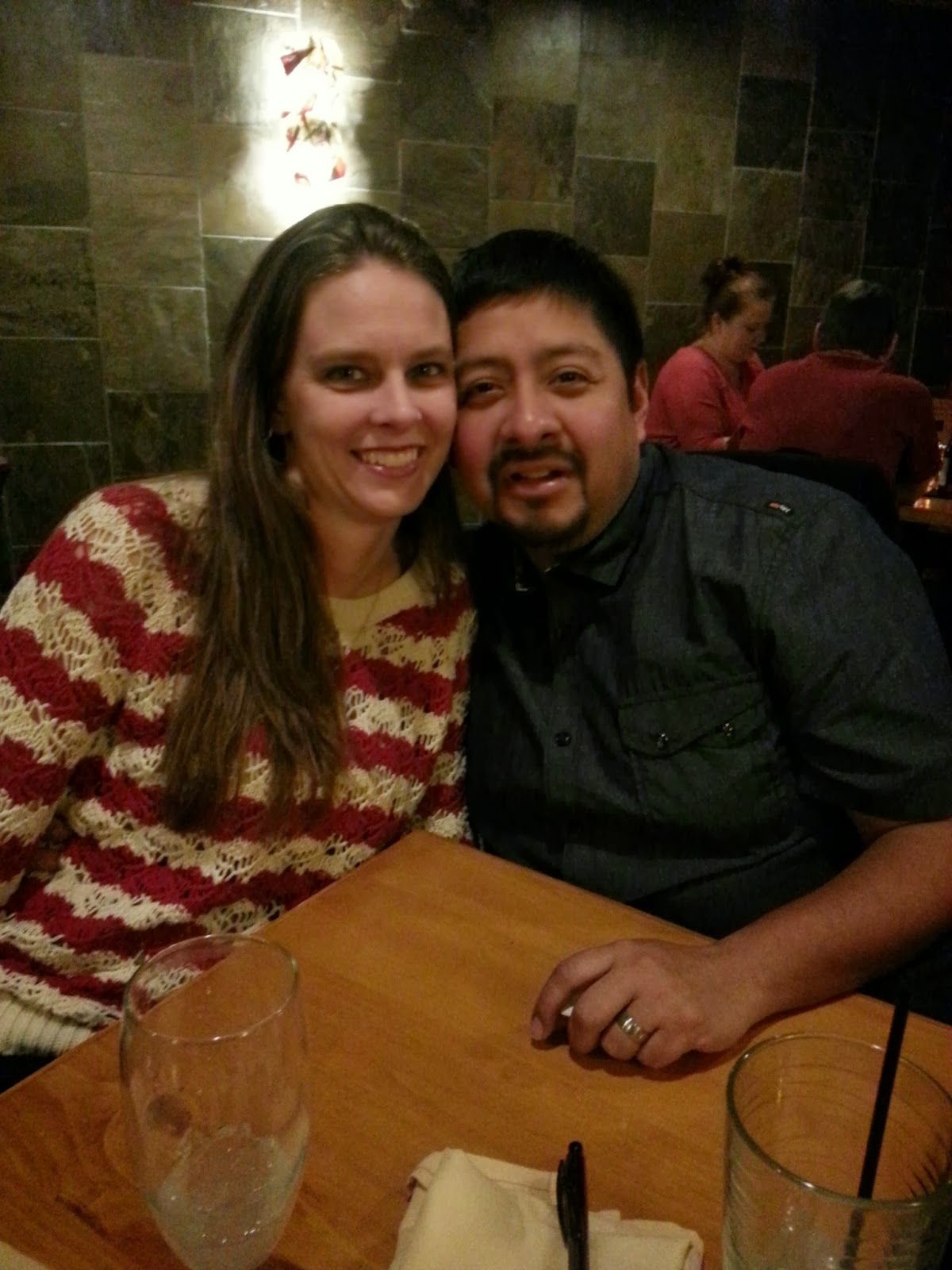 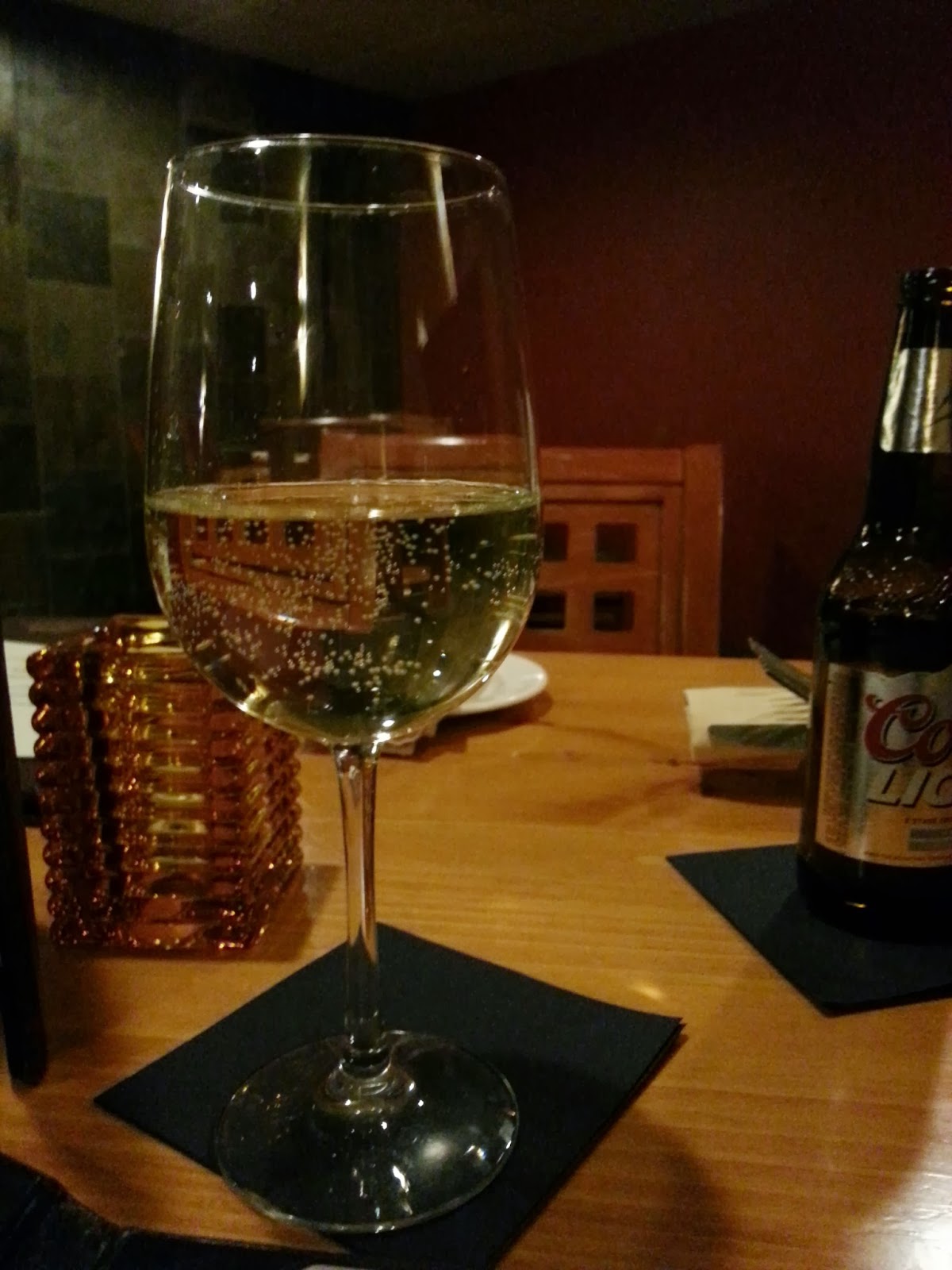 Saturday we slept in, got massages, ate lunch, and later went to the Florida Georgia Line concert. The whole weekend was like one fantastic, super long date! It was bliss but we were ready to go get our baby boys on Sunday morning. We visited with Ryan’s parents for a few hours to catch up and ended the weekend like all our others – stories and snuggles and sharing more love.
An amazing Valentine’s for 2014!
love,
~C~

A sick-free week.  First one in quite some time and you can see that we actually were out and about a bit more from my pictures this week. I’m much happier with the seven photos and the story they tell this week than I have been the last few weeks, so I hope you enjoy them as well.

Problem with this project 365 thingy — I have pretty much forsaken my blog altogether aside from this series.  Partly due to being sick a lot, but also because I think in my head I know that I am going to do at least 1 post a week with a brief update on life.  I need to get back to blogging on a regular basis.  Eventually.
I’m still enjoying this project, still looking forward to Spring and more interesting things to photograph.  Linking up with Stephanie from Behind the Camera and Dreaming, Mindi from Simply Stavish, and Sarah from Nurse Loves Farmer for Catch the Moment 365. 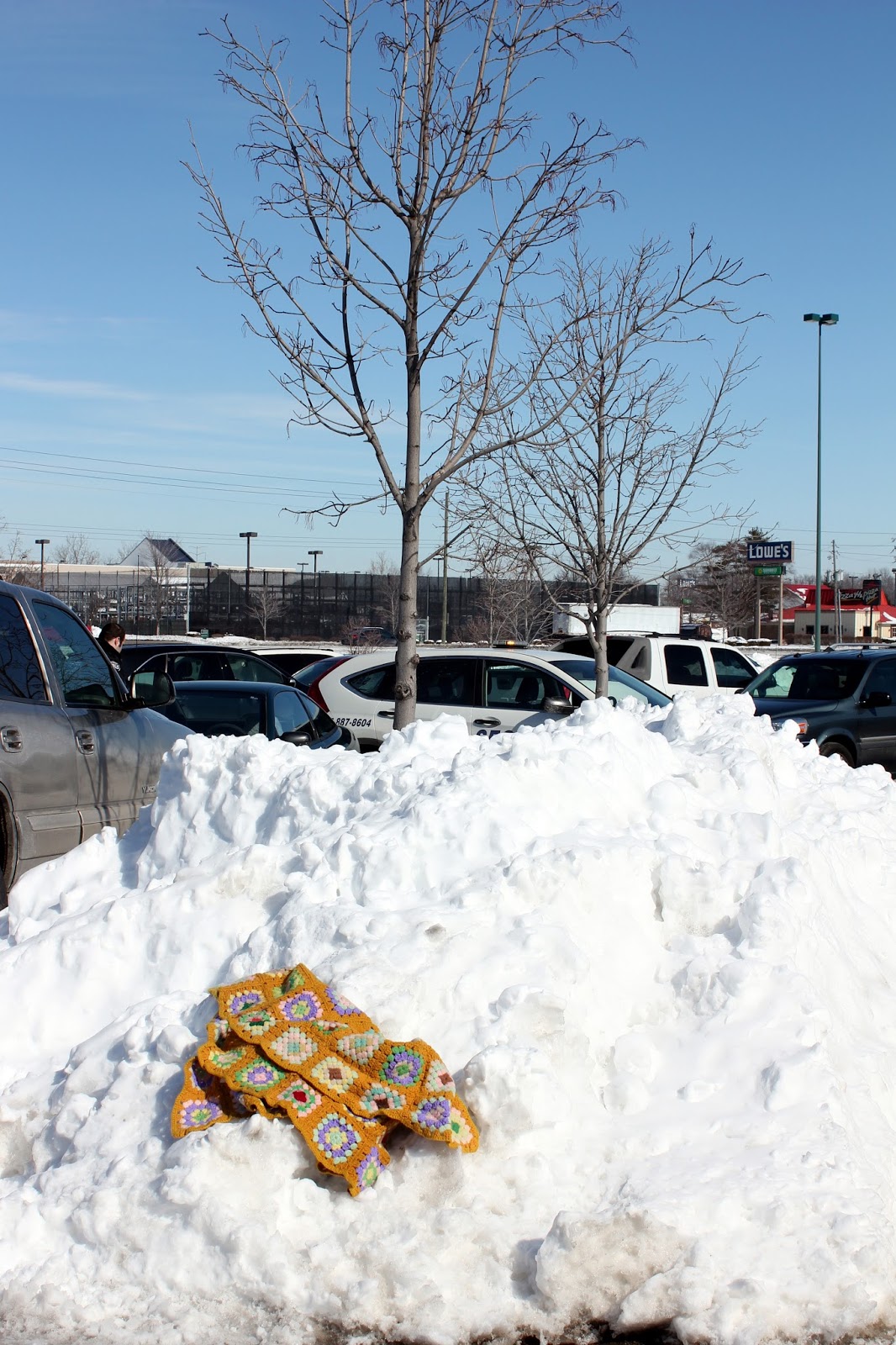 43/365: February 12th: So my co-worker/friend and I were going to the mall for lunch and I wanted to stop to snap a picture of how much snow sits in every parking lot to show my sister. We’d been talking about how I never saw dirty snow or mountains of snow until I moved from Tennessee to Indiana.  Every time it snows in Tennessee, it melts before it has a chance to get gross.  Anyway, we just thought this was a little odd!  Sorry about your blanket… 44/365: February 13th. Theo showing Dexter and I all the loot from his Valentine’s party at school. He was so excited to show us his little cards and treats. Truly one of the cutest things ever. 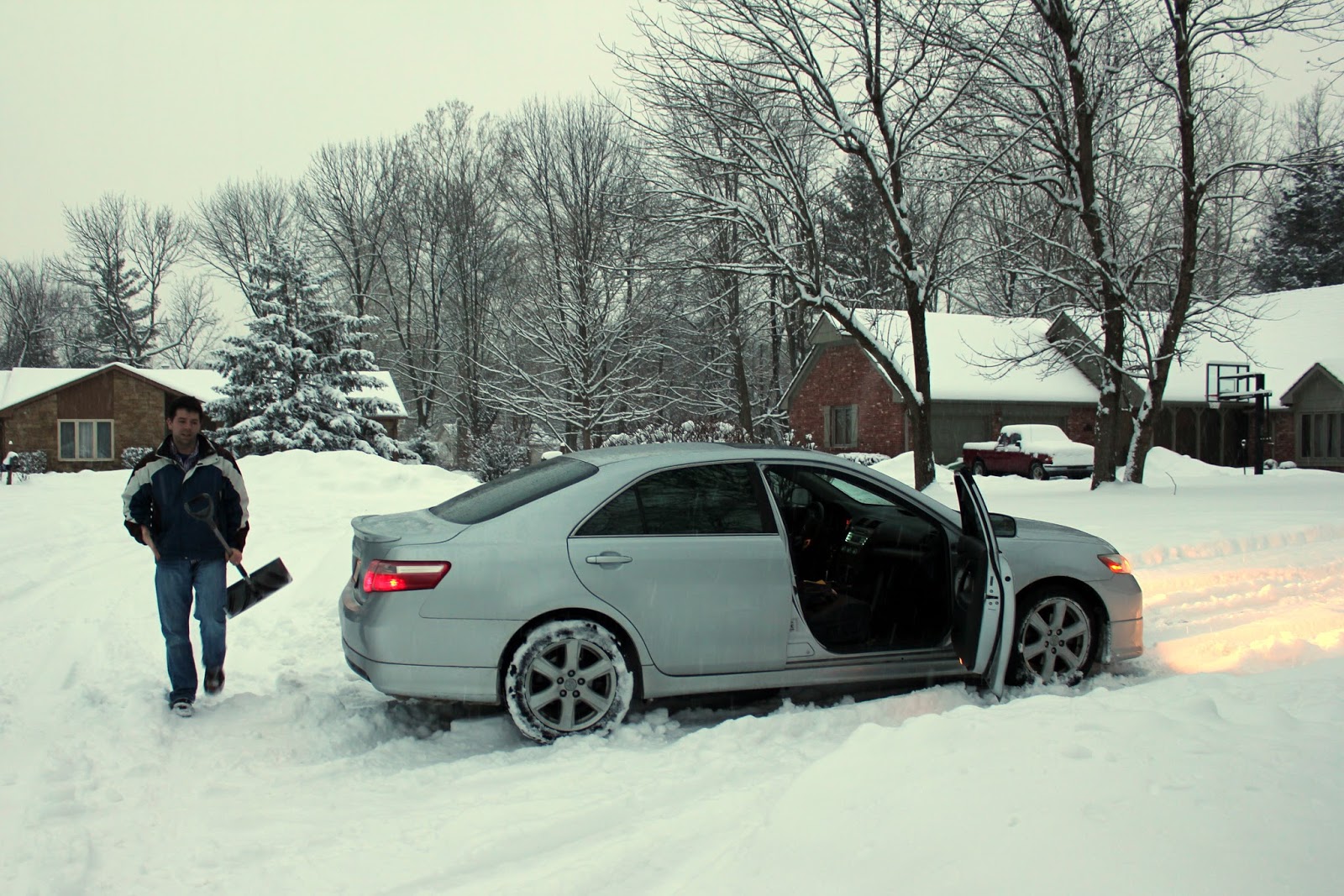 45/365: February 14th. Valentine’s Day!  The snowiest Valentine’s Day in Indianapolis’ recorded history. As if we are trying to beat any more records this winter.  We did go out to dinner, but not before Ryan dug our stuck car out of the driveway. 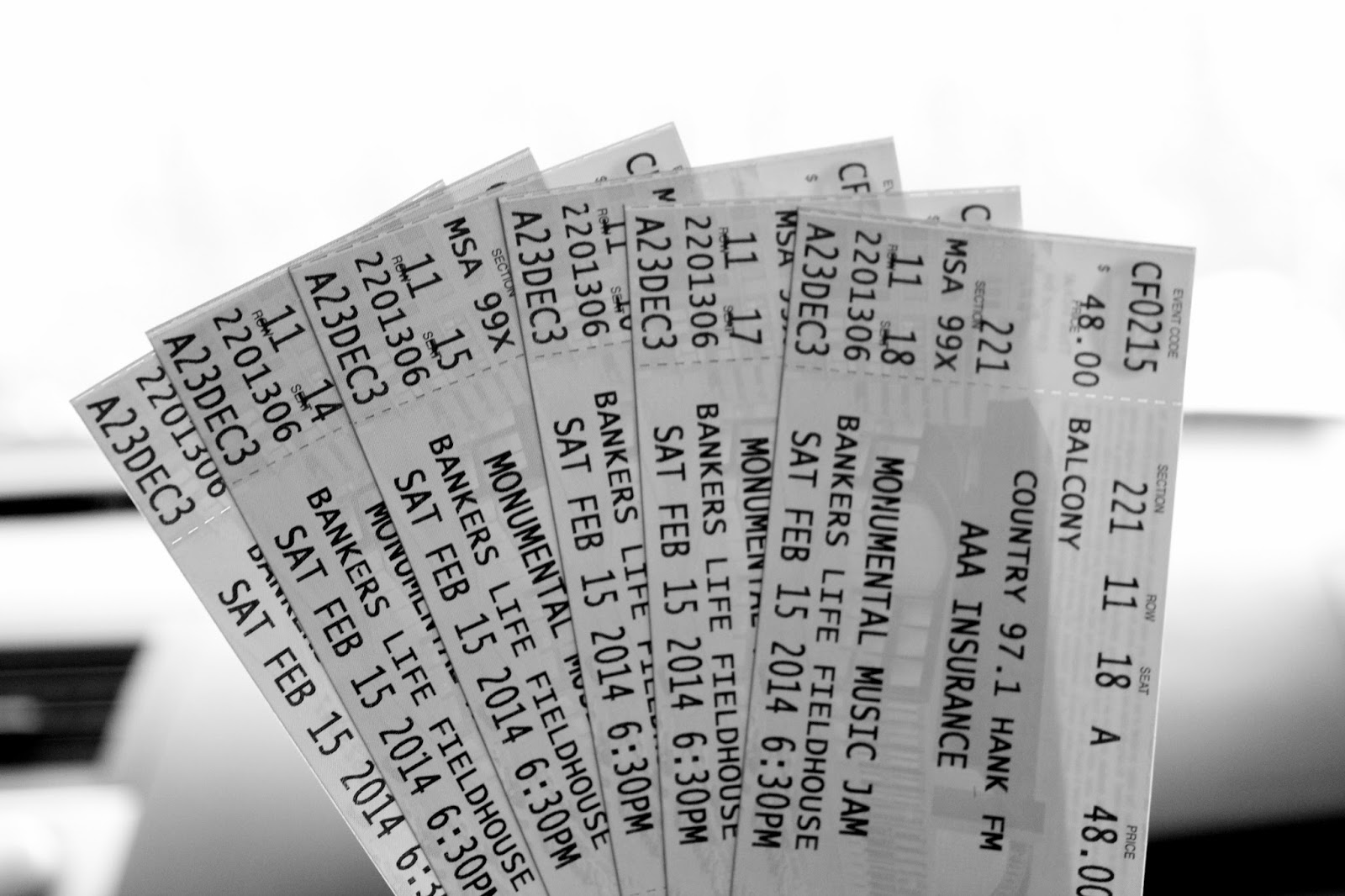 46/365: February 15th. It was a kid-free weekend for us! Hurrah! We needed the break and the fun since the last couple of months have been rough on the whole fam.  Plus, Ryan’s parents hadn’t seen the boys since Christmas. Everyone was excited for our weekend plans.  Ryan and I got a couples massage on Saturday and then that night went to the Monumental Music Jam featuring Thomas Rhett, Florida Georgia Line, and Brantley Gilbert. 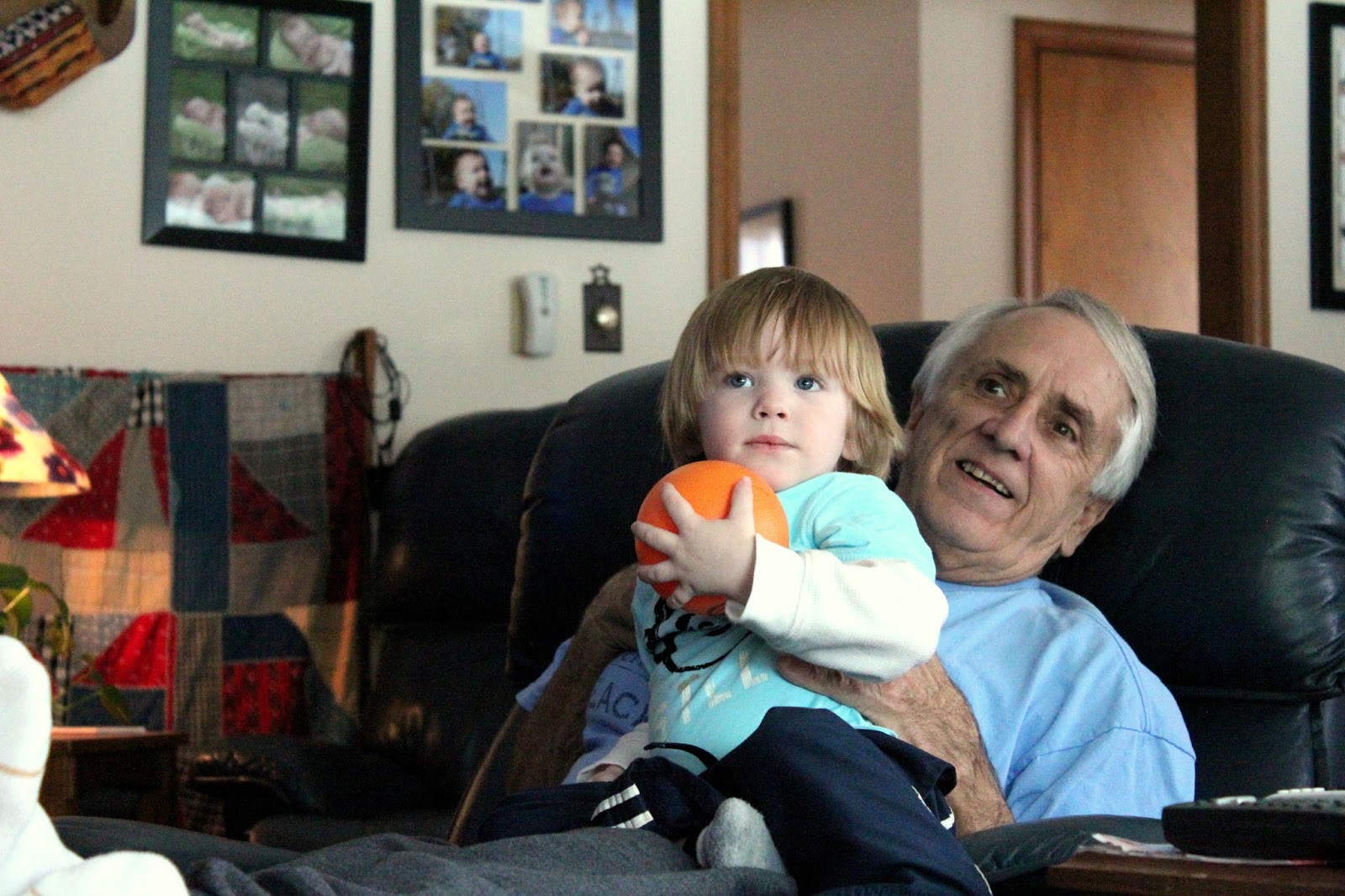 47/365: February 16th.  We drove down to Nana and Pop Pop’s (about 30 or 40 minutes away) to pick up the boys on Sunday. We were all happy to see each other and spend a few hours visiting. This little boy … Dexter Jay… is named after his Pop Pop (Michael Jay) and he sure does love him. 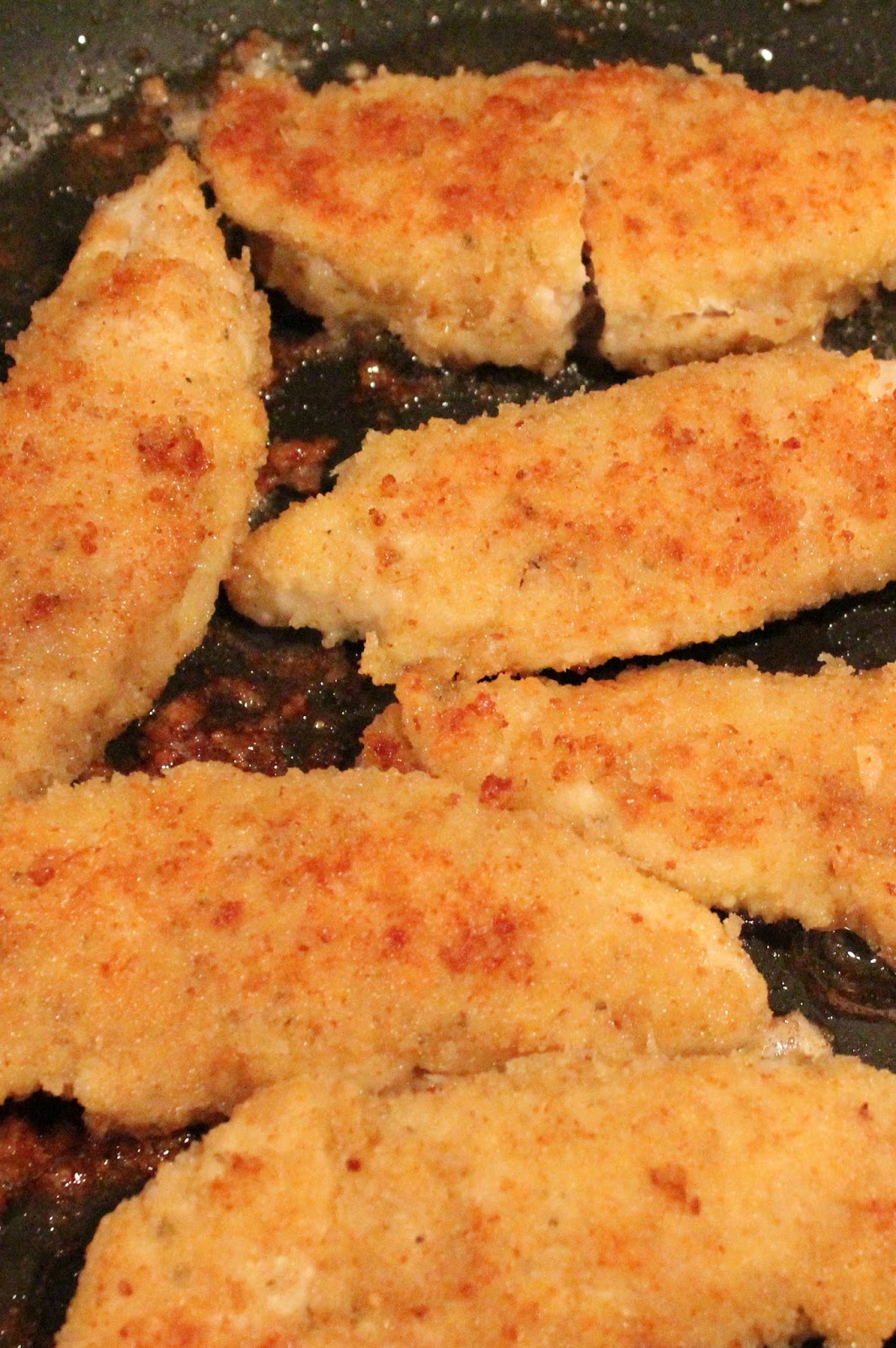 48/365: February 17th.  The grocery had been calling my name for about a week but I hadn’t made time to go. All I could come up with for dinner was homemade chicken tenders and they did not disappoint. Theo told me “the next time you fix dinner, you should always make these.” Sometimes the best meals are spur of the moment! 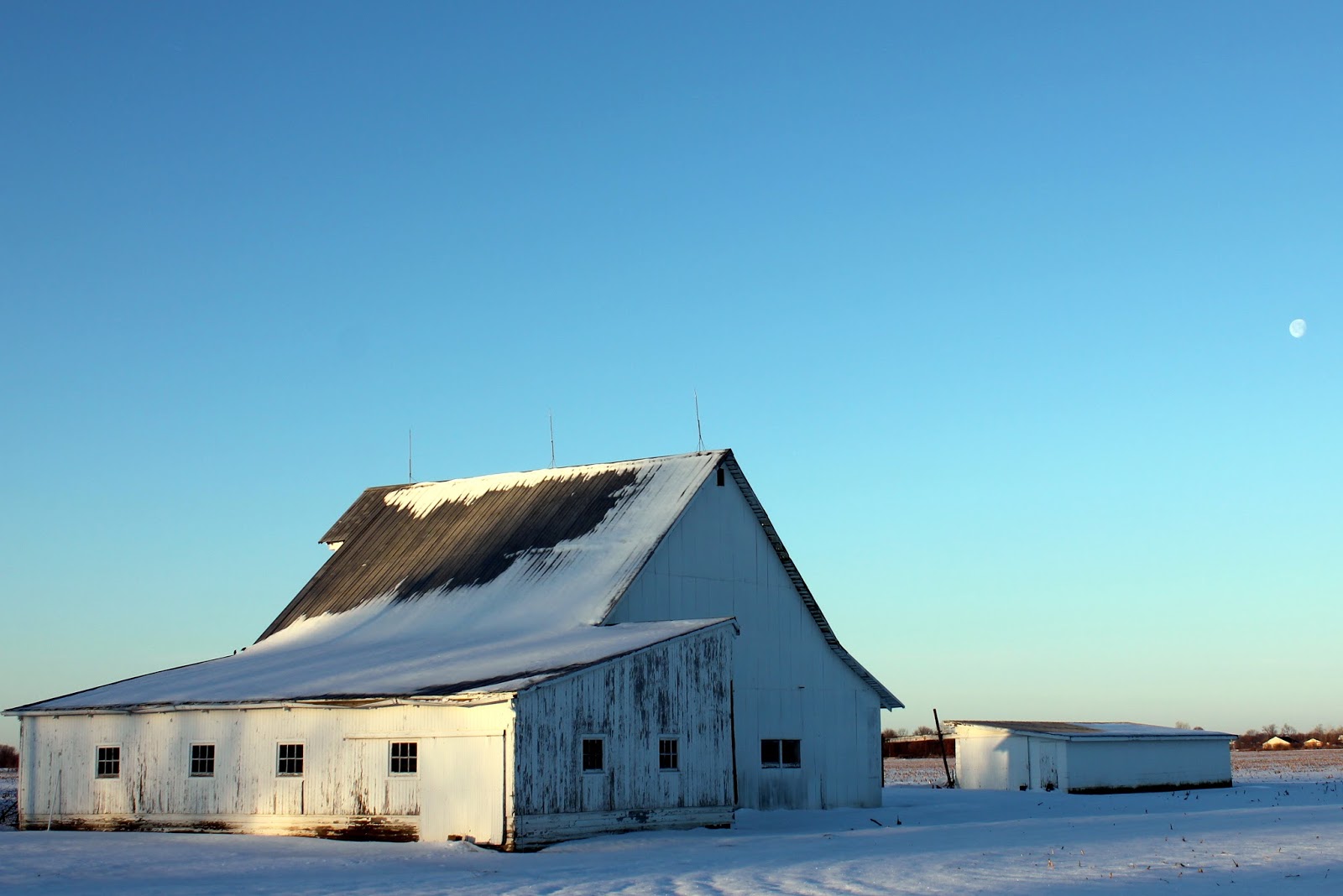 49/365: February 18th. On my way to work…this is what the Project 365 is all about for me. Capturing something beautiful or ordinary (or both) that I normally would not notice.  I literally stopped my car in the middle of the road (obviously after making sure no cars were anywhere in sight) and got out to snap this picture. Although it’s annoying to carry my camera everywhere I go, this is why I do it!
So, which picture is your favorite this week?  Mine? Hmm.. I really love this barn pic from Day 49, but also love my cutie boys on days 44 & 47.
Feeling better,
~C~

Y’all.  I’m embarrassed to say it.  I think you are going to stop believing me at some point.  I was even in denial for a day and a half this time.  SICK AGAIN this week.  I came down with strep throat Thursday night (what? It’s been 2 weeks since the last time I had it, totally normal, right?) and then Dexter was diagnosed with pink eye and an ear infection on Friday.  More depressing sickness. More depressing weather.  More, more, more of the same, same, same.  More redundancy in every aspect of my life.  Here are some more fantastic sickness photos to blow your mind! (Why am I doing this again??) 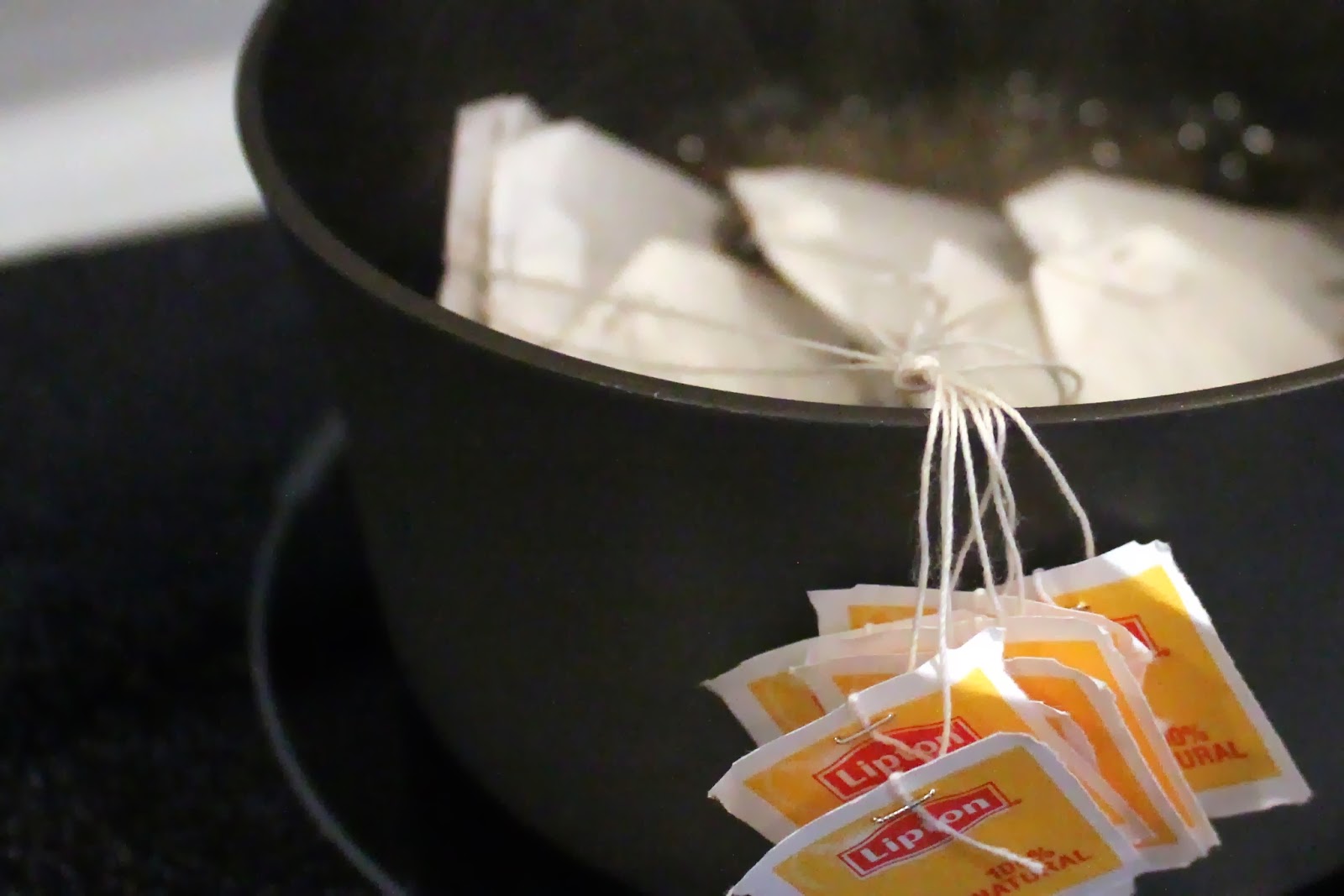 36/365: Wednesday, February 5th.  I make a couple of gallons of iced tea every week. I used to drink it super sweet but a little over a year ago when I started trying to cut calories, I began sweetening with just a little Splenda and I prefer it this way now. 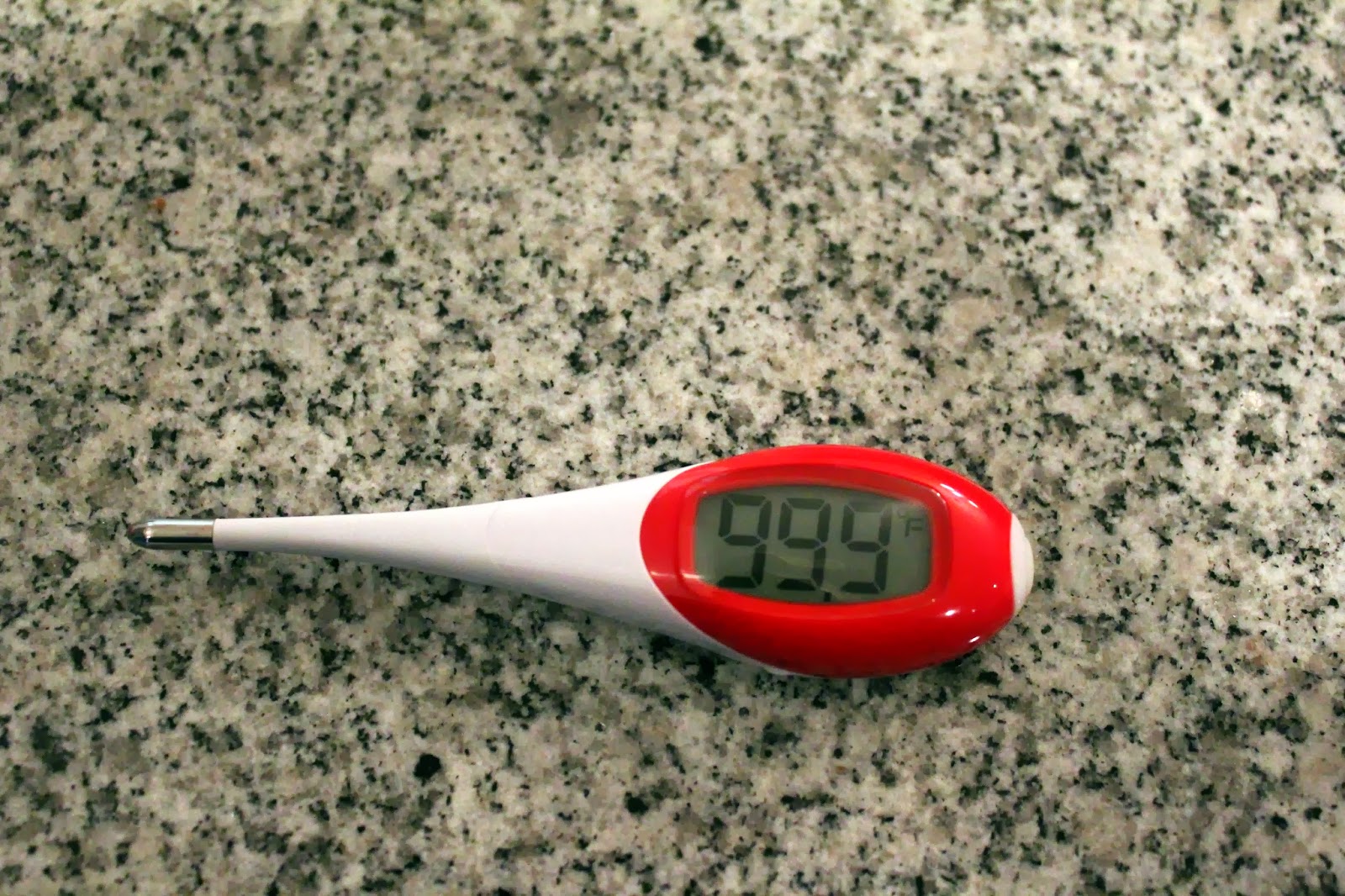 37/365: Thursday, February 6th. One of my tires went flat at work and I stood outside in 11 degrees for about 30 minutes while it was being changed. When I came back inside, I could not stop shivering.  An hour and a half later when I left work, I was still shivering and my back and neck had an all-too-familiar ache.  I knew I was coming down with a fever.  I had a bit of a sore throat but couldn’t believe that I’d have strep again so soon.  I went home and isolated myself in my room. 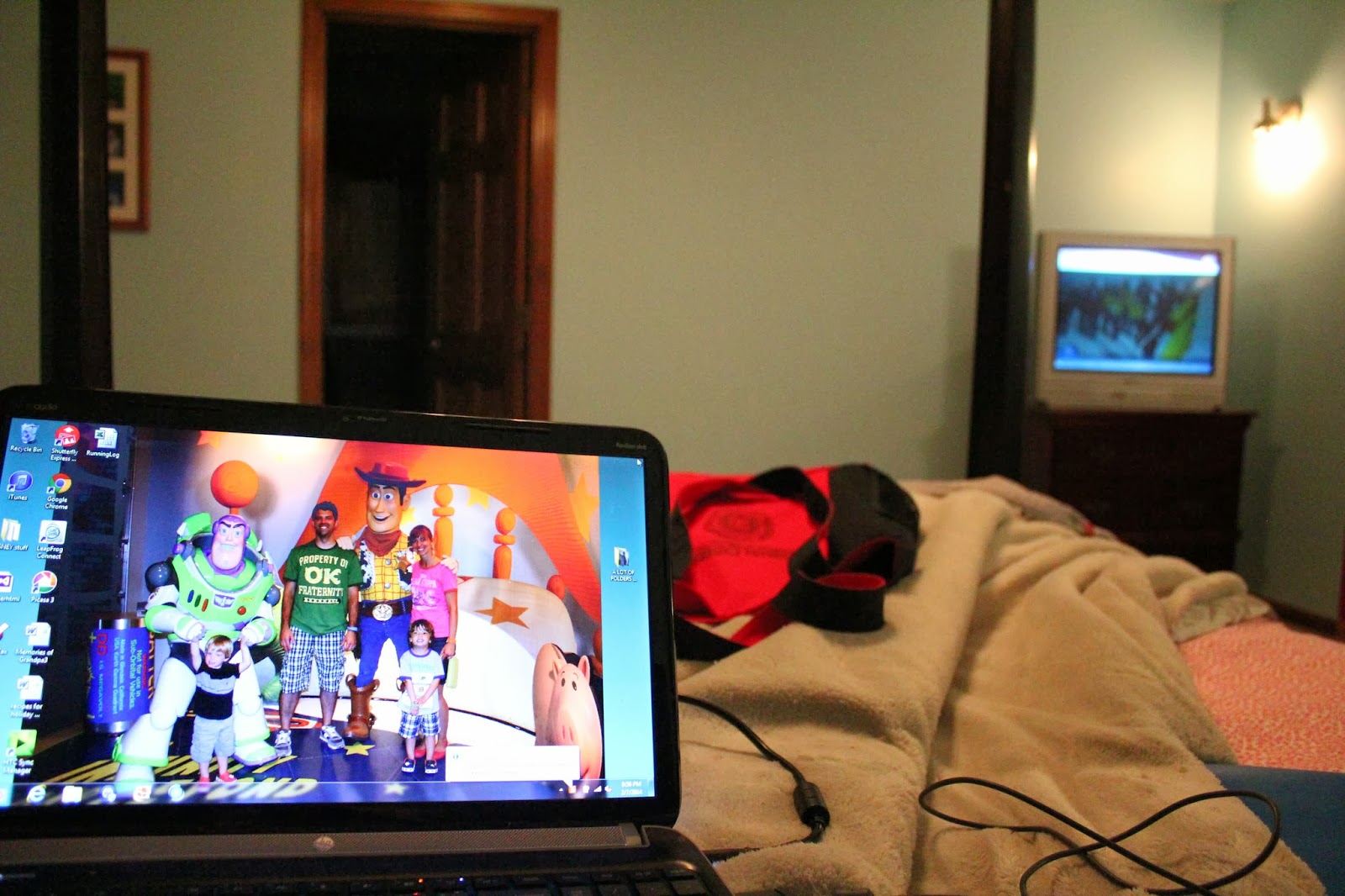 38/365: Friday, February 7th.  After suffering through a miserable night, I barely moved from the bed all day.  I didn’t go to work and didn’t see the boys other than my brief trips to the kitchen for water or medicine.  I called my doctor to make an appointment but of course they had nothing available. I thought about going to urgent care but was foolishly optimistic that I was getting better when taking 3 Aleves eased the severity of my throat pain for a few hours. By midnight, my fevers were gone but my sore throat was even more excruciating.  The photo was taken around 10pm when I finally felt well enough to sit up and do a little work while watching the Opening Ceremonies of the winter games. 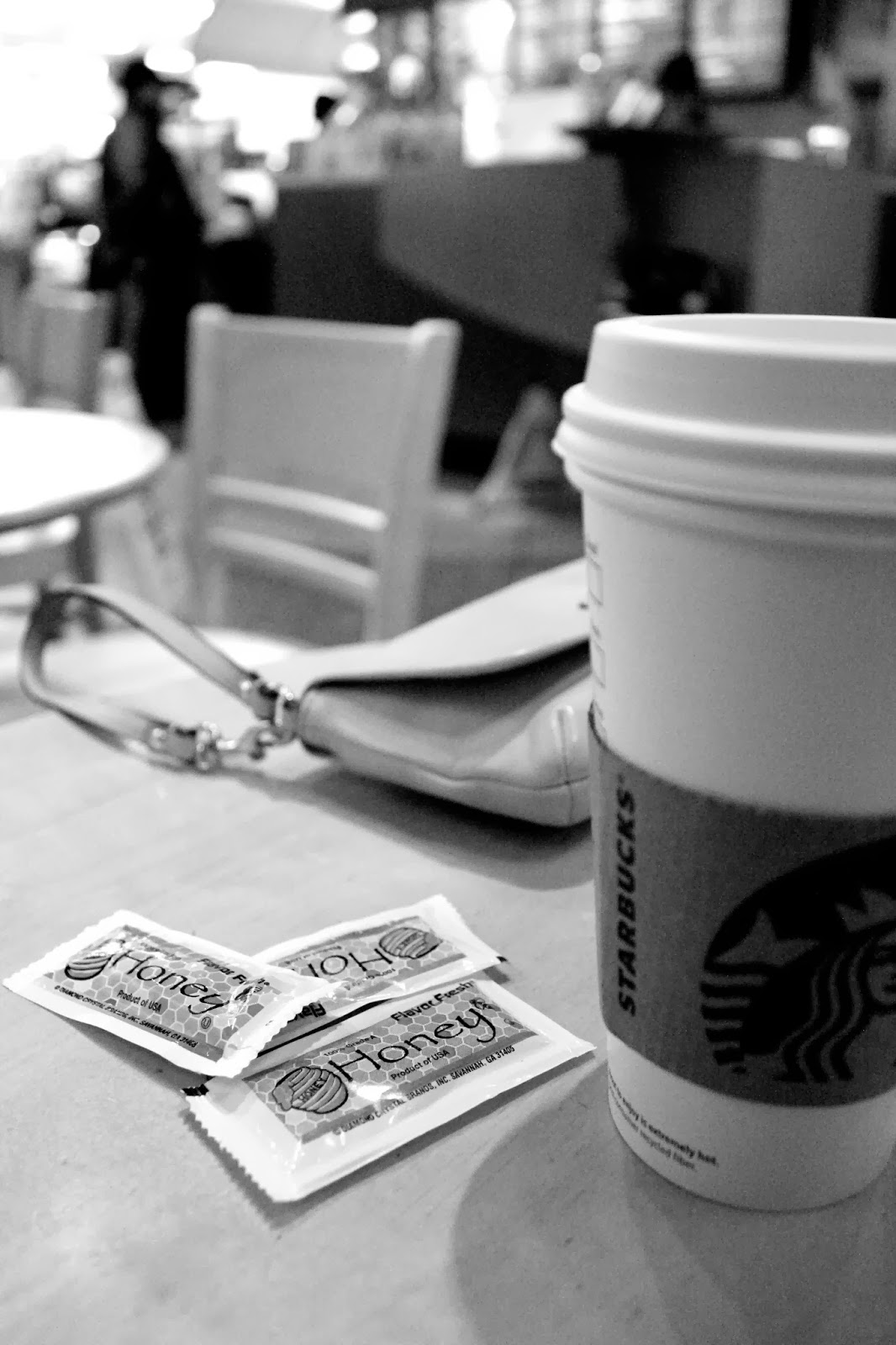 39/365: Saturday, February 8th. I went to Urgent Care as soon as the doors opened Saturday morning and the doc confirmed that I had strep throat, that I didn’t have mono, and sent me on my way with a penicillin prescription.  By Saturday afternoon, Ryan was itching to get out of the house with the boys so he took them to dinner and the toy store. I decided there was no reason for me to sit there by myself, so I went to Target and sat at Starbucks for a good 30 minutes sipping hot tea with honey before buying some chloraseptic, chamomile tea, lozenges, and Cepacol.  I’m not sure any of it did anything for my sore throat, but it was worth a shot. 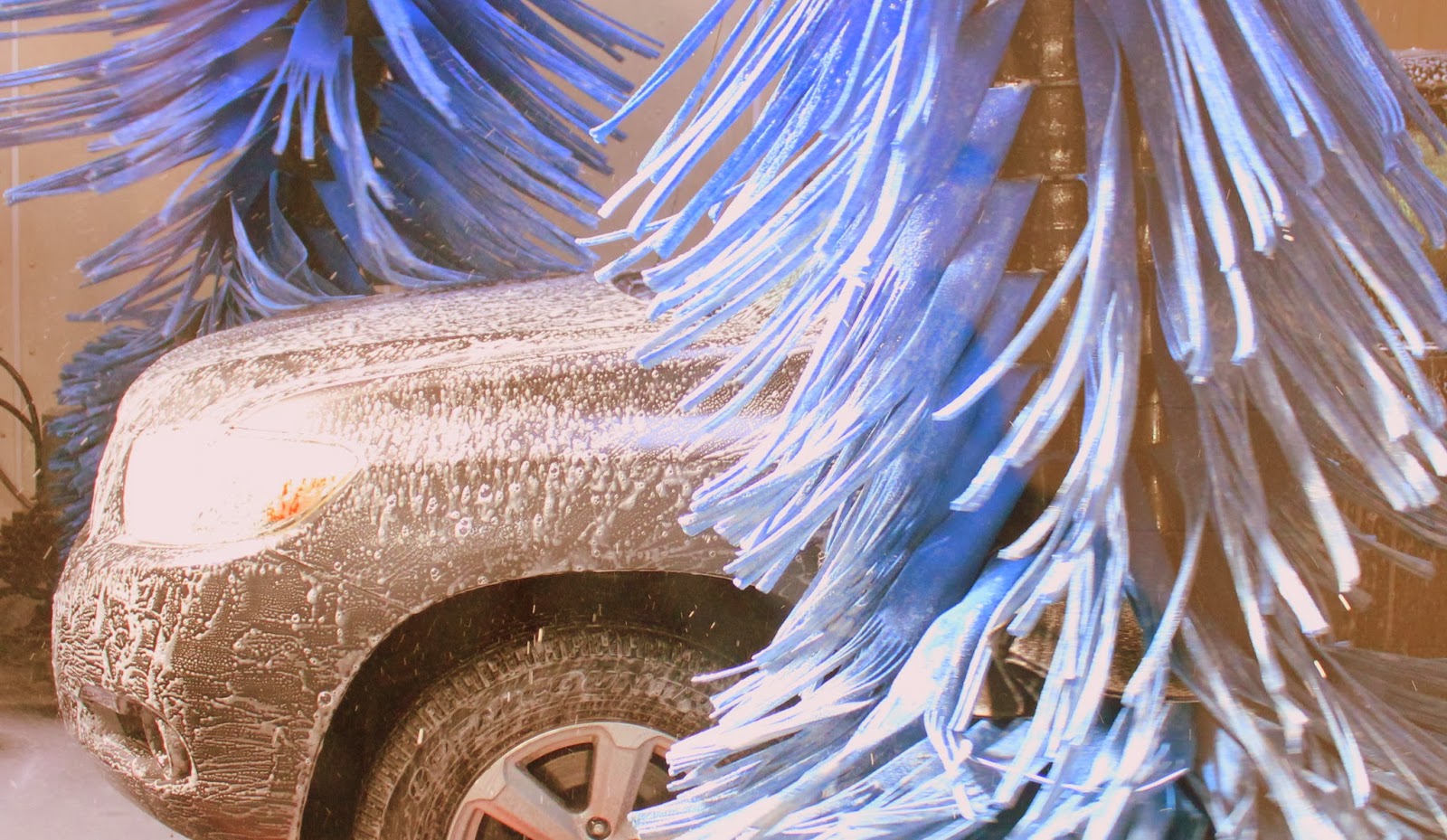 40/365: Sunday, February 9th. I decided to end my solitary confinement since I’d been on antibiotics for 24+ hours, I missed my family, and we all had a bit of cabin fever.  We took the boys to see The Lego Movie (so cute!). After we came home, I planned to get that flat tire fixed before something happened to my spare, but the tire store was packed. I opted to take my car to get washed, inside and out, in hopes of eliminating some of my sick germs from an environment that I am constantly breathing in, coughing in, and touching with my hands. 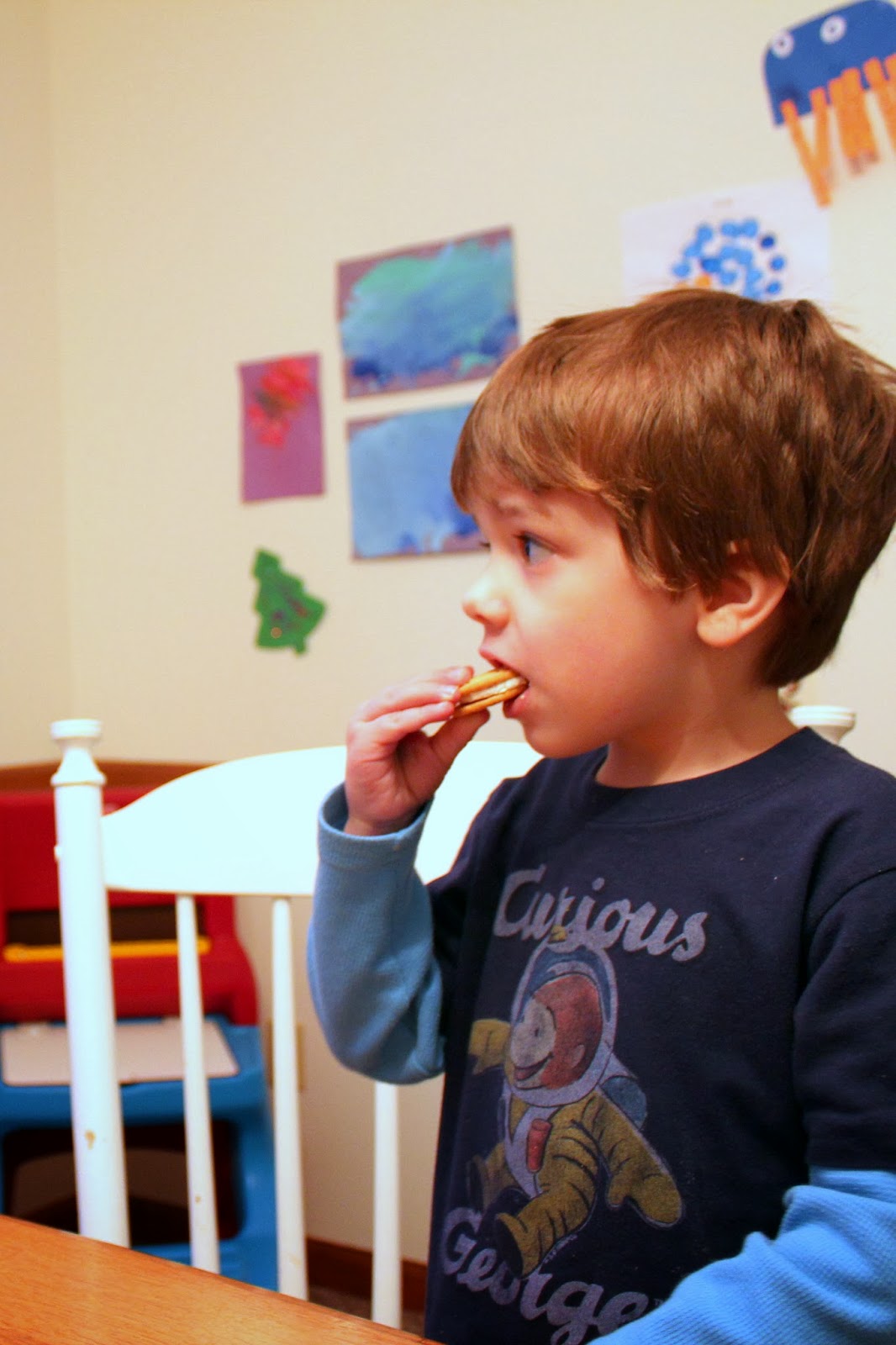 41/365: Monday, February 10th. We ate at McAlister’s Deli while my car was being taken care of at the tire shop and when we got home, I let the boys try the new Marshmallow Crispy Oreos.  Theo said “Mom, these are delicious. Absolutely delicious.”  When did he turn thirty again?? 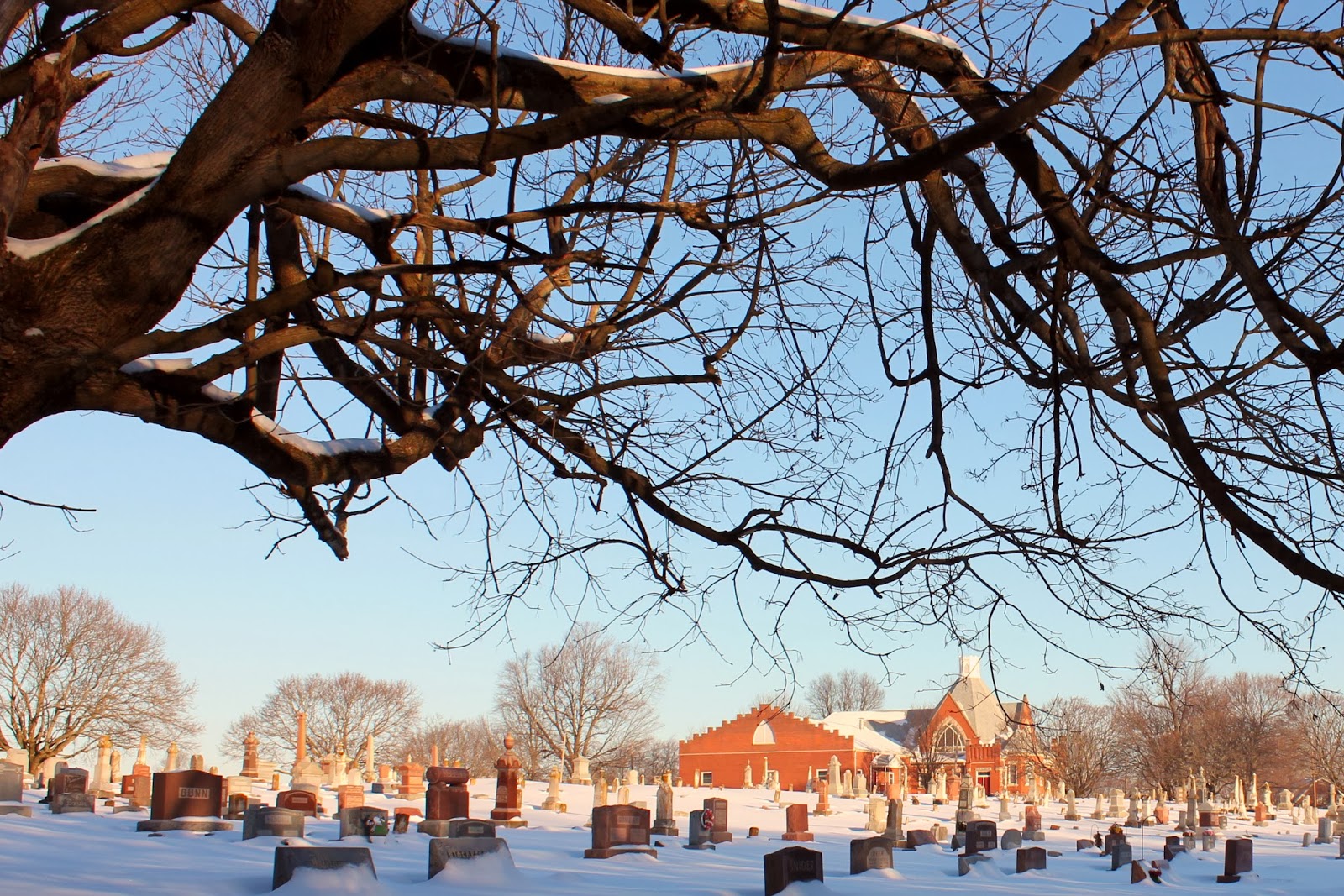 42/365: February 11th. I pass this church and cemetery on my way to work every day and always want to stop and take a picture, but never make time.  So on this day, I did. The windows on the church have some beautiful detail but as I approached the church, I drove up on a truck sitting next to it and didn’t want to creep someone out by getting a close up, so I kept on driving until I got this view from a distance.  I’ll keep looking for an opportunity to be a creep when no one’s there.
Not a single picture of Dexter this week, that’s kind of sad. I took some, they just didn’t make the cut for the post. I took very few pictures on my sick days and rarely ever left my room so I sure wasn’t taking pictures of the boys those 3-4 days.  Shew. I’m going to rename this challenge Catch the Disease 365.  Surely it has to get better, right?  Soon?
What’s your favorite picture this week?  I like the one of the church (day 42) but I know I can do better.
xo,
~C~