I had big dreams for 2014.  Big dreams for myself in 2014.  I got on a roll with running in 2013 and completed Couch to 5k. Running had always scared me because of my less-than-stellar knees.  No, I didn’t play sports…no I didn’t have a car accident or an injury. I just inherited really crappy knees.
So I was surprised that the more I ran, the less they bothered me.  Maybe getting 25 pounds off was what helped my knees.  Who knows.  I learned to like running. I won’t say I loved it. I kind of hate it during but love the feeling of accomplishment afterwards. It’s euphoria when I am able to push myself to meet or surpass a goal. I’m not and don’t ever plan to be a long distance runner. The furthest I’ve ever ran continuously is three and a half miles.  I was completely okay with that distance, but I wanted to just be consistently getting good, challenging exercise.
For 2014, I planned to run 25 miles per month or a total of 300 miles this year.  Unfortunately, in the first 6 weeks of 2014, I also experienced some unplanned obstacles. Like 2 separate stomach bugs, the flu, and 2 separate rounds of strep throat.  I ran 15 miles in during the month of January somehow but obviously fell short of the 25 mile goal I needed to hit to stay on track for running 300 miles for the year.
February rolled around and I ran again but there was trouble. Not far into my run, I had a debilitating pain in my left knee.  I tried to walk it off and run again but the pain got worse. Nothing popped or snapped, I never knew where the pain was coming from or why it was happening. I gave up after three attempts that day and decided to let my knee rest. That week, my knee hurt… all the time.  Standing up from my chair at work. Walking towards the back of the grocery store.  I was really worried. I continued to rest it. I ran once in March and it was a little better, but still hurt.
By this point I was wondering if my running days were over. I was debating seeing an orthopedist but didn’t have much luck the last time I went to one. They wanted to do an MRI that would be $1800 out of pocket and we were in the middle of moving so I put it off and eventually my knees stopped bothering me as much.
I fell in April, badly scraping both knees, which gave me another excuse not to run. About a week after the fall, I noticed that I hadn’t had any (internal) knee pain. I waited for another week for the scrapes to heal and could no longer resist the urge to run.  I was able to run over two miles and have been running off and on ever since then, but not with the consistency I would like.  Some days my knees hurt a little, some days they hurt a lot.  Occasionally…rarely, they don’t hurt at all.
I’ve given up on my dream of running 300 miles this year – obviously – but I still like getting some exercise every day one way or another. Lately it’s been too humid for me to run. I’m just not that hardcore and it’s too hard to breathe.

My weight has crept up a little as I haven’t been watching what I eat as well as I used to. Well – I’m still watching. I’m still using MyFitnessPal to log calories and exercise daily.  I have just been eating a lot more of what I WANT than what I should.  My original goal was to lose 20-24 pounds and last year my weight loss hovered around 25-27 pounds.  I’m back to about a 21-22 pound loss, which is okay, but I liked 26 a whole lot better!

So I’d love to hear any ideas people have about keeping motivation high long-term in order to keep the pounds AWAY long term.  Maintaining just isn’t as fun or rewarding as losing, ya know? Neither is gaining.  If anyone has had long-term success at keeping weight off, please feel free share your tips and secrets. It’s so easy to slip into old habits.

In a nutshell I said I wanted to do these things below and here is an update on each item.

1. Lose weight, eat healthier, and exercise more.  Done.
2. Be cuter – get some new clothes and fix my hair and wear makeup.  Ehhh.  I did have to get some new clothes because I lost weight. I did wear make-up some, but not a lot.  I am okay with that.  I pull my hair up in a ponytail 90% of the time.
3. Self-care like flossing and taking my contacts out every night? FAIL.
4. Blogging more regularly – probably about the same or a little better than 2012. Done.
5. Organizing the house – I cleaned out a few closets and cabinets and routinely make piles of stuff for goodwill.  Kinda sorta halfway done but more to do.
6.  Styling our home – I hung a few pictures and painted a couple of cabinets in the past year but this house is nowhere near where it needs to be. FAIL.
7. Photography – took exactly zero classes and slacked off on taking every day random photos of my kids. FAIL. Did not even attempt Project 365 but did successfully complete one month of Photo A Day on Instagram. I don’t think that counts…just saying.
8. Me time – I have done better with this in 2013!  I have a monthly date night with a girlfriend and spent time alone at the gym and running.  WIN!
9. Relationships – spending more time with friends. This one kind of goes with #8.  I haven’t done any better at calling friends on the phone.  I only see a couple of friends.  I could do better and reconnecting/maintaining connections with friends that I don’t see out of convenience or coincidence.
10. Relationships – spending more quality time with my husband.  Aside from the occasional night or weekend that the boys stay with Nana and Pop Pop, Ryan and I don’t get a whole lot of time alone. We are too tight (financially) to pay someone to watch the boys.
11. Finally, groceries/cooking – NO.  I intended to plan meals for the week before going to the grocery store. I don’t have/make time to do this and I can’t see that changing.  FAIL.

Well, I definitely see some progress in areas but there is work to do.  This is giving me food for thought for my next post, my 2014 resolutions.

Technically, my December post should be “11 months in” but since it’s the end of the month and almost a year since my original post, I’m skipping a month.  It has been one year since I decided enough was enough and that I was tired of feeling gross and eating gross.  My goal for the year was to lose 20-24 pounds and stay in that range. I started off using My Fitness Pal on both my phone and on the computer to log EVERY single thing I ate.  I don’t think I skipped a single thing I put in my mouth until about May of this year.  I was hardcore!  This was the catalyst for my success going forward.  Mid to late January I joined the gym and started doing cardio and weights a few times a week.  In March, I decided to try Couch 2 5k.  In May I surpassed my goal of a 20-24 pound weight loss. I completed the program in June but didn’t do the race I had signed up for.  (C25k is a 9 week training program in which you run 3x per week in increasing intervals until you can run for 30 solid minutes).

I continued running in the summer but it was much more intermittent just because it was so hot out and I was busier with playing with the boys outside.  I continued managing my diet well and hit my highest weight loss in 2013 at about 28 pounds lost.  I picked up running again before our vacation in October and was really on a good roll.  Even after Thanksgiving, my weight loss to date was about 25 pounds.  In December, well….

In December, I’ve weighed myself sparingly.  And watched my consumption of junk very sparingly.  I’ve put a few pounds back on but I think for today, it’s safe to say my weight loss is around 22 pounds for the year.  Still within my goal range but I’m definitely not feeling the best that I have felt all year.  I was in the best shape when I was running three times a week. I feel squishy and out of shape right now and my pants are tighter than they were a month ago.  With that being said, I can’t believe I was 20+ pounds heavier this time last year.  I’d call my new year’s resolution a success, but I still have work to do. I will do a separate post with resolutions for 2014, which will include continued health/fitness goals. 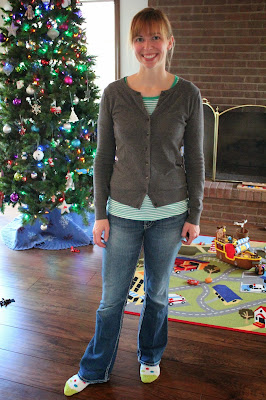 And I’m okay with that.
Still a work in progress,
~C~